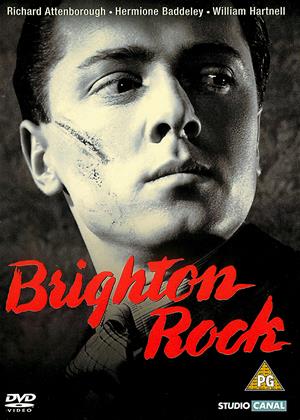 Far superior to the 2010 remake - Brighton Rock review by RP

I watched the 2010 remake of 'Brighton Rock' recently and ordered a copy of the original 1947 version so that I could re-watch a classic film starring a young Richard Attenborough - and to compare the two.

It probably goes without saying that the original is the better film - it has a far darker atmosphere, Pinky Brown is more naive yet far more menacing, and the understated violence seems far more shocking. It's set in the 1930s and the period detail (cobbles, short trousered boys, lack of telephones, gas lighting, uniformed waitresses in the cafe) is quite evocative - even the use of 'Kolley Kibber' as a technique to drum up business for the newspaper.

[Aside: As a boy, I remember 'Lobby Lud' from the 'News Chronicle' in the late 1950s- but by then the challenge was 'You are Lobby Lud and I claim my five pounds'. That's inflation for you - but I digress...]

The underlying theme of Graham Greene's novel is about faith, guilt, sin, good and evil, right and wrong, hatred, love, damnation, confession and redemption. Much of this is present in the film - mentions of Catholicism, the rosary, the dialogue with the nun at the end - but the significance is reduced compared to the novel. A major difference from the novel is the ending - the film has the climax on Brighton pier rather than the coast at Peacehaven and has the record jumping so that it cynically repeats 'I love you', rather than the novel's original ending where Rose will hear 'the greatest horror of all'.

Although I admired the quality of the direction of this film and the beautiful photography, I did not really enjoy the film. It is about gangsters in Brighton, gang wars and brutal, sadistic and cold blooded murderers. The acting is patchy, Attenborough is unbelievably menacing and uncaring. He just does not look as bad as he should. I was expecting a film of a literary masterpiece. This was too ordinary and grim. On the positive side I agree with a previous reviewer about the accuracy of the period. Very nostalgic.

The stilted filming , the excessive stereotyping, and the inevitable ending , made this a dull watch but it was made in 1947 !

The language itself is a reminder of how our values and culture had changed !