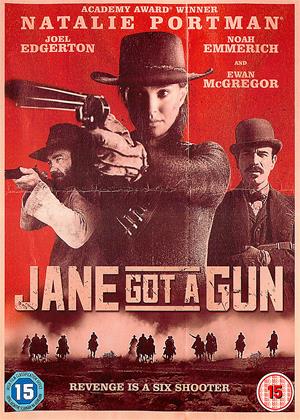 This dour, one-note western never gets going. There’s so much wrong with it – the script, the direction, the sound, the score… None of it has any life at all. The acting is so monotone that it seems to have been post-dubbed in a recording booth, and it feels like you’re in the booth with them rather than in the great outdoors. Clichéd flashbacks explain the relationships among the characters but they’re irrelevant and further reduce what little narrative drive there is. The climax occurs inside a shack at night and is a masterclass in how not to direct action. It’s dark, it’s confusing, it’s shot too close-in with a handheld camera and is absolutely dire. Not that you’ll care who lives or dies anyway. The trailer shows all the best bits in two minutes without the flashbacks so just watch that instead.

Way, way better than its given credit for - Jane Got a Gun review by MD

I can understand why this film may not have gone down too well with either audiences or critics: (a) it is not your usual bang 'em, shoot 'em up western; (b) it is very uneven in quality; (c) it is not a story that will particularly grab your attention first time around.

Watching it, in respect of (b) there were times when I wanted to throttle the director, yet other times when it really had me gripped, and overall it was a film that grew on you the longer it went on. It is, without doubt, quite a deep drama, more akin to what you might see in the theatre than at the cinema, but it did have the virtue of seeming to portray pretty realistically the life of a woman in the wild west.

Ewan McGregor is becoming annoyingly cliched in every role he plays, but even he is okay here, and everyone else does a fine job of portraying the essentially rather stereotypical and shallow characters that play second fiddle to Natalie Portman. She has gone the opposite way from McGregor, leaving behind her pathethic roles like Queen Amidala to become an accomplished actress of some power, and whilst her role here is a touch unbelievable in parts, she commands the screen and delivers a complex, nuanced performance.

With regard to (c), once you watch it again (if you are so minded!) you will find it works a lot better, and comes across as quite a bold and challenging piece of some merit. Ultimately, I decided I liked it a whole lot better than many other more accessible movies, so if you can deal with its challenges and flaws, I think it deserves a viewing - or two!

Natalle Portman got talent - Jane Got a Gun review by PT

After reading some Luke warm reviews I really enjoyed this western . Nothing new there, its all down to the individual, what do they know about my taste, or indeed what do I know about yours, but here's my take anyway.

Jane needs help because the bad guys are coming for her and her husband, imminently. She goes to see her old flame (Joel Edgerton) to beg for help, he's reluctant to say the least , as she's already ripped his heart out and stamped all over it by deserting him for an outlaw.

I thought Portman was great as Jane, a real believable gutsy woman, haunted by past events, but still willing to fight for love.

"Everybody has a story" to paraphrase Jane, and thus we are given the back stories of the characters in flashbacks, of course then things become clearer.

I also thought that Ewan McGregor gave the film an interesting and well acted villain.

Only just over an hour and a half, that flew by, as it is a fast paced western. Did it for me.

Dreadfully slow - Jane Got a Gun review by CN

Good cast but slow and dry. Can't tell you what happened after 46 mins as it went back to Cinema Paradiso.

Disappointing failure to follow through on the title, with Jane being pushed to the margins so boys can play with guns instead. Really wish Lynne Ramsay had been able to stay with the project and make her version - at least that way we would have been spared the ludicrous 'happy' ending.