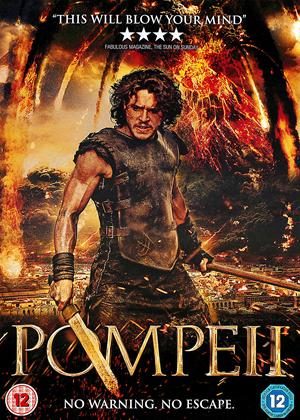 Great visual effects and a good story line, it is the type of film which I would watch again. The violence is kept in check, realistic without being too gory.

Those who are expecting (as I did) a magnificent screen version of Robert Harris' riveting historic fiction account of the last days of Pompeii, will be greatly disappointed. Although the main event is presented with some truly astonishing visual effects, the original storyline has been massively altered to make way to a mediocre action movie plot, involving barbarians, gladiators, legionnaires and the token love story. I truly missed the original detective/treasure hunt style storyline with interesting characters such as Pliny the Elder and vivid, historically researched imagery that brought the hustle and bustle of everyday life in Pompeii to life.

I'm a special effects fan so I was satisfied with their amount and quality in this film, but in hindsight I wished they had stuck to Robert Harris'/Roman Polanski's original screenplay. The resulting film was pleasant but left a bad taste in my mouth.

This is clearly an expensive film with teams of Hollywood promoters ensuring a truly homogenised product. Body building hero meets girl from forbidden class but they elope anyway da..de..da.. what a load of Hollywood pulp, I bet it made millions. If you like visual effects and can sit through any rubbish to get it, it is amazing.

Eruption of total dross - Pompeii review by AS

A cross between 'Conan the Barbarian' and 'Downton Abbey' in togas, with acting about the same level as 'Postman Pat' and dialogue so awful it makes 'Up Pompeii' look like a work of genius. On top of that, the makers clearly haven't the remotest idea of what actually happened at the doomed city. All concerned should be dropped into the nearest volcano. Goes straight to the top of the list of The Most Ludicrous Movies Ever Made.

All I really know about Volcanoes I learnt from extremely bad 90s action movies where the hero must save a small town, or LA in Tommy Lee Jones’ case from a massive erupting volcano. Their task is impossible but they still seem to try to do everything and then end up doing very little, save for saving a few people or a family full of extremely irritating children. Pompeii follows the same pre-existing formula as the latter films but it seems nobody told director Paul W.S Anderson that this is 2014.

Pompeii follows Milo (Kit Harington), a slave turned gladiator who finds himself travelling to Pompeii to fight days before the dreaded eruption. Once he gets there he meets the beautiful Cassia (Emily Browning) who has found herself at the mercy of the vicious and dictatorial Roman senator Corvus (Kiefer Sutherland). However when the eruption begins Milo must help Cassia escape his clutches and the city alive.

Not only is Pompeii completely ludicrous (Vesuvius proceeds to do things no volcano has ever done) but its utter nonsense as well. Milo and Cassia form a til death do us part link after a few longing glances and a bit of bonding over some of the worst veterinarian skills known to man. Anderson understands the fun in a good old fashioned disaster movie but he doesn’t even try to make it seem plausible, despite the based on a real eruption section of the story.

Not only that but the film devotes almost half its runtime to building up, well, nothing. Everything you need to know is presented within the first 10 minutes of Pompeii but the film proceeds to meander through pointless scenes for almost 40 minutes as Milo practices long and hard on his brooding with fellow gladiator Atticus (Adewale Akinnuoye-Agbaje), a character far more interesting and charismatic than the temperamental Milo.

In the end Pompeii is like most disaster films, low on sense and high on mind boggling CGI. While the film's final act is wall to wall violence and impressive visuals it never really makes a whole lot of sense with the film's final moments being more hilarious than tragic. If anything, Pompeii is a terrific film to watch with friends, slightly inebriated with the knowledge that what you are about to watch is total nonsense but if you accept it you might just laugh and cheer your way through the awkwardness of it all