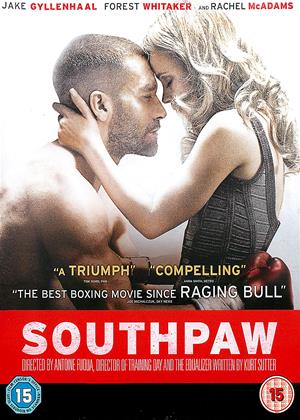 Loved this move, amazing performances by Jake Gyllenhaal and Forest Whitaker (in fact the whole cast is spot on). I've always had a thing for boxing so this obviously helped but it's the sort of movie that draws you in whether you're into boxing or not. Cried my eyes out as well. All I can say is, rent it and watch it !!!!

If you’ve seen one boxing movie, you’ve seen them all. Rocky set the standard and road that train the hard way down. When you’re reduced to including life-sized robots and Russian juggernauts, it says a lot about the longevity and creativity of boxing movies. Southpaw plays it safe by not veering far off from the formula into such fantastical areas. It’s a plot that makes a very staged grab at sentimentality, but plays it straight enough with fleshed out characters to not be laughable or boring. It works hard to earn the climactic cheer of the predictable final fight.

Part of what raises the bar for such a script is the acting of Jake Gyllenhaal. He melds well into the role of Billy “The Great” Hope, a bittered and battered boxer with a cocky spirit and a good heart. He rarely turns down a fight in the ring despite the recommendation against from his wife Maureen (Rachel McAdams). The only thing he loves more than boxing is his little girl Alice (Clare Foley). During an out-of-ring scuffle when his opponent calls him out for a match and insults his woman, a fight turns lethal when Maureen is shot and killed in the altercation. Thus our hero is beaten down by her death, loses his house to taxes, loses his daughter to family services and must fight his way back to the top. It’s time to hit the gym with coach Tick (Forest Whitaker) to start honing some hurting bombs for the big match that will fix everything.

So, yeah, very standard boxing affair, but there is an undeniable strength to the direction of Antoine Fuqua. Maintaining his gritty style, Fuqua builds up Billy with great determination and large enough hole for him to fight his way out of. It’s bad enough that he loses his wife to his adversary, but an even bigger blow when his daughter is taken away. Rather than focus all of his growth on the training, there are some emotionally tugging moments of Billy visiting Alice at the family services visiting room. She is initially heartbroken at being torn away from her dad, but grows cold realizing he can’t get her out of their. The visits turn more silent until she simply refuses to her dad when he comes knocking. Billy has to make some major changes before he can not only gain back custody of his daughter, but her heart as well.

But Billy’s grand answer to be financially stable and a suitable father all lies on the big match. By the third act, it’s all about the fight. Training intensifies, punches hit harder and the determination reaches its peak for a boxer with his entire life on the line. Even Alice perks up to view the fight as she realizes this will bring back the father she once loved. Fuqua is playing right into the manipulating of emotions with a cute kid, but he doesn’t play up her emotions too simplistically by so easily swatting her to the side. Clare Foley does surprisingly well as a girl conflicted on just how to feel about her pop. She does just as well as Gyllenhaal with his gruff and damaged psyche that so desperately wants to do the right thing. Creating such realized characters makes the bloody blows of the well-shot boxing matches all the more engaging.

Southpaw offers nothing all that new in the way of boxing pictures, but it does please for with effective jabs of sentimentality and violent sport. When Fuqua aims for our heart, he hits more often than he misses. When he wants us to feel the blows of a fight, it’s hard not to root for our hero to pull through such a bloody battle. There may have been some bigger drama that Fuqua touches on which could have made for a much different and more profound boxing picture. But in terms of being faithful to the ever-repeated boxing movie format with all its cliches, it’s a suitable enough sports picture with a great cast to boot.