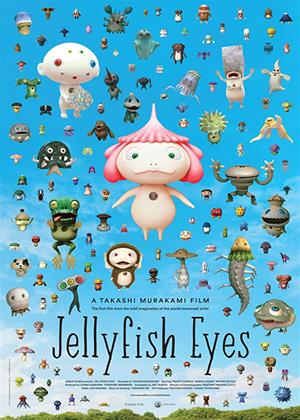 Synopsis:
The directorial debut from acclaimed artist Takashi Murakami, 'Jellyfish Eyes' brings its creator’s endless imagination to the screen in a tale of family, friendship, and loyalty, set in a world of fantasy that only Murakami could conjure. Having moved to a country town with his mother following the death of his father, young Masashi (Takuto Sueoka) immediately makes a most unlikely friend: a flying, jellyfish-like sprite that he nicknames Kurage- bo. Taking Kurage-bo under his wing and into the classroom, Masashi soon discovers that his schoolmates have similar friends - and that they, their creators, and the town itself are not all they seem to be.
Pointedly set in a post-Fukushima world, Murakami’s film carries a message of cooperation and hope, while boasting unforgettable creature designs and handcrafted special effects nearly a decade in the making. A touching triumph of creativity and wonder, 'Jellyfish Eyes' is a must-see for film lovers of all ages.
Actors:
Takuto Sueoka, Himeka Asami, Masataka Kubota, Shôta Sometani, Hidemasa Shiozawa, Ami Ikenaga, Asuka Kurosawa, Takumi Saitoh, Kanji Tsuda, Mayu Tsuruta
Directors:
Takashi Murakami
Writers:
Takashi Murakami, Yoshihiro Nishimura
Aka:
Mememe no kurage
Genres:
Action & Adventure, Comedy, Sci-Fi & Fantasy
Countries:
Japan, Action & Adventure, Comedy, Sci-Fi & Fantasy

Unavailable
Kirei? the Terror of Beauty

Upon the announcement of adapting the mobile app Pokemon Go into a movie, there was much scoffing about how such a movie would be made. There were plenty of Pokemon movies adapted from the TV series, but how do you make a game specifically about Pokemon Go? Look no further than Jellyfish Eyes, a bizarre kids movie from Japan that’s more about monsters and battling than the stress of being the new kid in school.

Before I delve into the juvenile explanation of why monsters in Japan are present and can be controlled by children via smartphones, let’s address the simple setup. Cross-eyed boy Masashi has just moved into a Japanese suburb. He lives in an apartment with his mother after the recent loss of his father. It’s assumed from Masashi’s dream that the recent tsunami during the real life Fukushima incident claimed the life of his dad. The incident plays a big part in how the local religious zealots have grown anxious and spiteful of the research at a local laboratory. One of the religious nuts has a daughter that Masashi fancies in his new class, if only he could overcome his crippling shyness.

To bring Masashi out of his shell is a jellyfish-like creature with big eyes and tiny limbs. The adorable little Pokemon can fly through the air, consumes cheese and can speak a little Japanese in between his cute grunts and coos. He naturally becomes Masashi’s best friend/pet that he dubs as Jellyfish Kid. But Masashi’s new friend is not that unique as there are several little monsters present in his new school, all secretly controlled by the children from their smartphones. While Masashi may not exactly have the edge for being the only kid with a monster friend, he at least identifies with the other kids on some level, even if he still ends up bullied in the worst ways.

But, wait, where did all these Pokemon come from? Stick with me here as this is when the story becomes overly convoluted and silly. A mysterious cult that dresses in black cloaks are attempting to harness some special energy from children. The energy is amassed by the kids controlling these digital monsters known as F.R.I.E.N.Ds, an anagram so ridiculous I couldn’t remember what all the letters stood for over my laughter. Even more hilarious are the lazy names for the devices that control the F.R.I.E.N.Ds, referred to only as Devices. The F.R.I.E.N.Ds come in all shapes and sizes, from small reptiles rendered in CGI to a practical effects fuzzy lummox that looks as though it escaped from Sesame Street. The cult needs the energy generated by the children and their F.R.I.E.N.Ds to unleash some evil force of energy that turns out to be a big ugly monster for all the other F.R.I.E.N.Ds to fight.

I was initially taken in by the sheer audacity of the filmmakers to pursue such a ludicrous story where a CGI anime girl battles ugly creatures and a swarm of children shout with their smartphones held high in the air to stop the evil threat to their town. But it’s perhaps not insane enough in its story which, at its core, boils down to a rather standard story of the new kid in town. Masashi’s arc is nothing new or interesting the way he is presented with a violent bully and fights for the love of a girl, in between trying to look shocked and amazed at all the special effects around him. The special effects of the F.R.I.E.N.Ds range from decent to awful with an out-of-place feel in most scenes where they crowd the screen. If they were anything less, this would be a direct-to-video movie for featuring such an uninspired plot.

What baffled me most about the production of Jellyfish Eyes was how it tries to be so commercial for such an original property. There are no Jellyfish Eyes video games, comic book, cartoons or toy lines that it’s based on. So why does this movie feel so clunky as it tries to whip up a lackluster Pokemon story with no Pokemon to sell? Kids are going to be pissed when they can’t find a Jellyfish Eyes plush doll to take home or a video game to play after sitting through a mediocre experience where they’d rather pick up a controller or squeeze a toy.