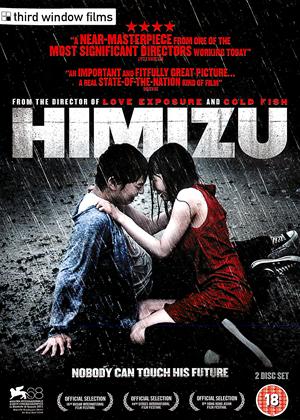 Synopsis:
The powerful story of two teenagers' struggle to live in dystopian future Japan destroyed by a natural disaster. Keiko (Fumi Nikaido) is a fourteen year old girl obsessed with Yuichi (Shota Sometani), in fact she is self admittedly his stalker. She collects his words and wallpapers her room with them, repeating them like a prayer and getting overexcited at spending any time with him. Yuichi is going through troubling times, his mother has left, leaving him to run the family business and his drunken father has run up debts with the yakuza which he must repay.
When young Yuichi is pushed too far he embarks on a violent campaign of revenge against society's evil doers and it's up to Keiko to try to bring him back to the path of a decent man.
Actors:
Shôta Sometani, Fumi Nikaidô, Tetsu Watanabe, Mitsuru Fukikoshi, Megumi Kagurazaka, Ken Mitsuishi, Makiko Watanabe, Asuka Kurosawa, Denden, Jun Murakami, Yôsuke Kubozuka, Yuriko Yoshitaka, Takahiro Nishijima, Anne Suzuki, Moto Fuyuki, Yûko Genkaku, Keisuke Horibe, Shôhei Kawai, Setchin Kawaya, Shinji Miyadai
Directors:
Sion Sono
Producers:
Haruo Umekawa, Masashi Yamazaki
Writers:
Minoru Furuya, Sion Sono
Studio:
Third Window Films
Genres:
Drama
Countries:
Japan, Drama
Awards:

A teenage boy living in a post-apocalyptic dystopian Japan finds himself turning to violence and murder in an attempt to soothe his soul; thankfully an equally alienated classmate is there to help him when he least expects it.

Set against the backdrop of some unknown natural disaster – an idea that was supposedly triggered in the director after witnessing the devastation of the recent tsunami – the film follows fifteen year old Sumida (Shota Sometani) who is forced to drop out of school in order to run his family’s boat rental service. His home life is a distorted reflection of the destroyed world outside as his mother and father dish out violent physical abuse with one hand and complete ignorance with the other. Despite his best attempts to live a quiet life under these upsetting circumstances the additional threat of gangsters and debt collectors eventually push Sumida over the edge and he finds himself heading down a path pocked with violence, danger and death. The only person in the world who seems to care about him is his former classmate Chazawa (Nikaido Fumi) who in turn makes it her mission to pull Sumida back from the brink of madness.

This painful – both emotionally and visually – yet touching movie comes from the hand of acclaimed Japanese director Shion Sono, who the more cinematically literate readers may know from his Hate Trilogy (Love Exposure, Cold Fish and Guilty of Romance) and will also immediately recognize his somewhat poetic style and visuals.

No amount of poetry can really distract from the gore of Himizu, which translates to “Mole”, but the violence is depicted in such a way as to compliment rather than stand in for the story. The narrative is played out in an almost Shakespearian fashion; with elements of great tragedy and wrong doing some how counter balanced by, albeit bizarre, acts of selflessness and caring. The film radiates with a sense of needing and deserving; the need for hope the right for justice.

A hard film to watch Himizu is painful and rewarding, beautiful and desolate, poetic and obscene; yet for fans of the genre and of the director himself this is a deep and intriguing piece that deserves far more recognition than it has yet been given.