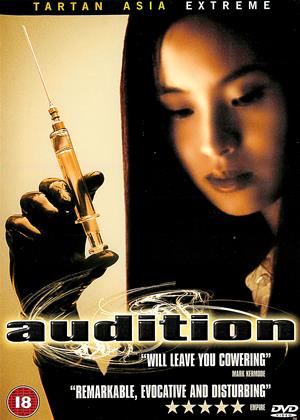 A masterpiece of Japanese horror - Audition review by CP Customer

Director Takashi Miike could not have structured this film better. Early scenes are quite light hearted, gentle, and include some quirky comical bits but as the film progresses the tone of the film gradually moves from light to dark. The tone shift is so naturally implemented that it never feels sudden or out of place, and by the time all hell breaks loose, the film really has you in its grip, won't let go, sucking you into the truly disturbing and horrific final scenes. Audition is easily Takashi Miike's best and most unsettling film to date, and for the most part, he does it without all the shock and gore he's normally associated with. Enough praise cannot be heaped upon this film, one of the best Japanese horrors ever made.

Seven years after the death of his wife, Shigeharu Aoyama (an excellent performance from Ryo Ishibashi) is urged by his son Shigehiko (Tetsu Sawaki) to start dating other women. After the tragedy of his wife’s death, the film then becomes almost a light comedy, as the two of them (and the dog, Gangu!) attempt to match-make the clearly floundering Shigeharu. After seeing a parade of women as part of an ‘audition’ to be his next wife, the stunning, demure (and a very young looking 24 years of age) Asami Yamazaki (Eihi Shiina), dressed entirely in white, utterly beguiles him, and it seems as if the feeling is mutual.

Shigeharu is a well-meaning, otherwise contented man with a genuinely warm-hearted family. Asami was a ballet dancer but damaged her hip, and yet otherwise seems very enigmatic; she lives alone in a flat with a phone and a curiously omnipresent sack … that moves. Shigeharu’s investigations lead to a morass of deepening mystery regarding all who knew Asami – at the dance studio she claimed to frequent is a man with prosthetic feet, the owner of a bar where she used to work was murdered (his recovered body was recovered alongside extra fingers, tongue and an ear, which fuels Shigeharu’s nightmares).

The contrast between the increasingly bizarre snapshots of Asami’s life and the pleasant mundanity that is Shigeharu’s life give a deliberately disjointed sense to the film: truly, we do not know where (if anywhere) the narrative is going, and what is going to happen next. Which is probably just as well.

Asami’s sack contains a dog-like creature missing the body parts found by the police following the death of the bar owner; she sits alone and silent awaiting his every phone call. Perverse and abusive flashbacks that may be dreams show the girl tortured and abused. When one day he doesn’t call, her anger takes on excruciating levels.

In a finale that will stick in the mind of anyone who has seen ‘Audition’, Shigeharu is drugged and falls to the floor of his living room, unable to move. Gangu is killed, and the warmth of the Aoyama family home is corrupted as Asami emerges, dressed in long leather gloves and apron, carrying an array of needles and torture implements. Very slowly and methodically, she inserts needles into his eyes and begins to cut off one foot, before moving onto the other. The delicacy and deliberation with which she carries out these paralysing punishments are filmed in meticulous detail and the results are painful even to watch. He is paying the price for not devoting himself entirely to her, as others have done in the past (‘All words are lies, pain doesn’t lie’).

Beware. This is not the cartoon style horror of monsters or zombies. This is real life gruesome. Very original, it literally gave me a nightmare.

A controversial horror film that is a major influence on the 'torture porn' horrors of the Eli Roth and others. It's certainly a creepy story and quite shocking too. You have to be a fan of this sort of thing to really appreciate it and it has its big fans not least Quentin Tarantino who described it as a masterpiece. I wouldn't describe it as anywhere near that although its influence cannot be underestimated. The problem with this and any film like it is that it's only memorable because of the controversial scenes and the remainder is often ignored or forgotten. Whilst this boasts a quite nasty torture scene it's in the earlier half of the film that you get the slow build up of tension and creepy horror. If the infamous torture episode was absent this could've been a more interesting film. It's a story of misogyny with a widowed man seven years after his wife's untimely death begins to think about remarrying. But no longer understanding the dating scene he and his friend set up an audition for a leading actress for a film but really for him to check out a future wife. He settles on Asami, a quiet, shy younger woman and he begins to woo her but predictably she has her own agenda fuelled by a sinister past. The film obviously has some resonance today after the revelations of the Weinstein crimes but it's not really a narrative that can be viewed as a feminist or #MeToo one as this is more about a disturbed psychopath. Whichever way this can be textually read it's always going to be renowned for the 15 minute gross out stuff which is a shame.