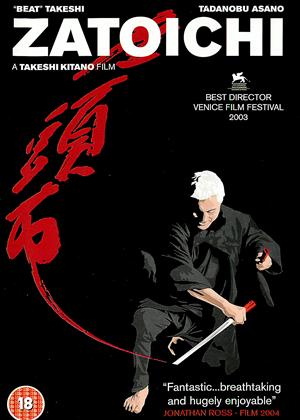 Zatoichi revolves around the character of Ichi, an unassuming travelling blind masseur, who despite being blind happens to be a master swordsman. With a blade concealed within his walking cane he uses his finely tuned senses of hearing and smell to guide him in his battles. On his travels Ichi enters a town in which several gangs are involved in a power struggle to take control of the town and its population. One gang eventually gains the upper hand and soon makes life a living hell for the locals. When Ichi befriends a local woman and her nephew they reveal the network of crime and corruption that plague their lives, he then sets out to deal justice and bring harmony back to the town. Overall, 'Zatoichi' is a great Japanese period piece that seamlessly mixes action, drama, comedy and some clever special effects. Be warned though, it's not a film for the fainthearted, the violence and gore levels are pretty high with blood nearly flying off the screen, although like Tarantino's 'Kill Bill', director Takeshi Kitano cleverly manages to create something artistically beautiful out of the blood and carnage. Exciting, funny, poignant, and beautiful to watch, highly recommended for anyone who enjoys Asian cinema.

An excellent film of the genre, won't disappoint.

Humm, I'll give it three stars - Zatoichi review by TE

I'd say it was a watchable outing but it's hardly ground breaking in what happens and not much in the way of a twisty plot either. This is no Harakiri (which is a large measure better).

I hadn't realized that Zatoichi (the character) had a much longer history than this single film which might explain why there's not much in the way of a backstory. Near enough the people turn up and chop each other to bits. These effects are gory enough, though as they are drawn directly onto the frames they are wobbly and are much more comical than special.

Still, it's watchable and a better than sitting through Venom.

Not sure what was going through anyone's mind that there needed to be a dance act at the end though ....