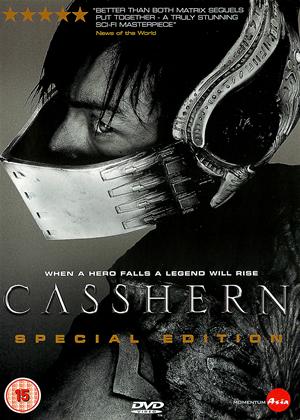 Synopsis:
It is late in the 21st century. After 50 years of devastating war between Europe and the Eastern Federation, the latter has emerged victorious and the new federation of Eurasia is formed. There can be no glorious peace however, as the planet has been ravaged by chemical, biological and even nuclear weapons and the entire human race is dispirited and exhausted by half a century of war. The only hope for long term survival lies with geneticist Dr. Azuma and his breakthrough 'neo-cell' treatment that can rejuvenate the body and could regenerate mankind.
But when his experiments go wrong, a race of mutant androids is released and only Azuma's dead son, reincarnated as the legendary hero Casshern, has the power to lead the war against the super robots.
Actors:
Yûsuke Iseya, Kumiko Asô, Akira Terao, Kanako Higuchi, Fumiyo Kohinata, Hiroyuki Miyasako, Mayumi Sada, Jun Kaname, Hidetoshi Nishijima, Mitsuhiro Oikawa, Susumu Terajima, Mayu Tsuruta, Ryô, Tetsuji Tamayama, Yôko Moriguchi, Hideji Ôtaki, Tatsuya Mihashi, Toshiaki Karasawa, Kôhei Kitajima, Ei Morisako
Directors:
Kazuaki Kiriya
Narrated By:
Gorô Naya
Writers:
Kazuaki Kiriya, Dai Satô
Studio:
Momentum Pictures
Genres:
Horror, Sci-Fi & Fantasy
Countries:
Japan, Horror, Sci-Fi & Fantasy

Casshern is set in a futuristic world, where after fifty years of bitter warfare the nation of the 'Greater Eastern Federation' has triumphed over 'Europa' to form the 'Eurasian Federation'. However, it's a hollow victory as the years of warfare biological and nuclear weapons have left the continent contaminated and disease has decimated the already battle fatigued population. In order to revive humankind, a geneticist called Dr. Azuma, proposes the pioneering use of neo cells which can instantly restore the human body to full health. After his plans are rejected by the government and leading scientists, Azuma is forced to receive funding from a sinister branch of the military. During a botched experiment he inadvertently discovers the secret of eternal youth, strength and reanimation. Although when he tests his new discovery he accidentally creates a race of mutant beings called the 'Shinzo Ningen'. With the mutants now on the rampage Azuma's reanimated dead son Casshern leads the battle to save humanity. One of the great things about the advent of low cost CGI and green screen technology is that special effect laden films are no longer exclusive to big budget Hollywood blockbusters, it has created a level playing field on which lower budget films can compete and 'Casshern' is a prime example of this. Director Kazuaki Kiriya brings a unique and highly visual style which cleverly blends the styles of such films as 'Blade Runner', 'Metropolis' and 'The Matrix'. The film is fast paced, intense and engaging, and the excellent script has some clever plot twists. The quality of acting is great and the characters within the film have real depth, and although at the start of the film there is a clear divide between the villains and the hero, the characters soon descend into whirlpool of chaos, where the heroes dark past is revealed, and the villains reveal a human side where the viewer is able to sympathise with their plight. The result is one of those rare movies about human nature that actually makes you think about life, death, and the futility of war. Overall, 'Casshern' is a great piece of film making with a smart story and breathtaking visuals. A must see for Sci-Fi fans.