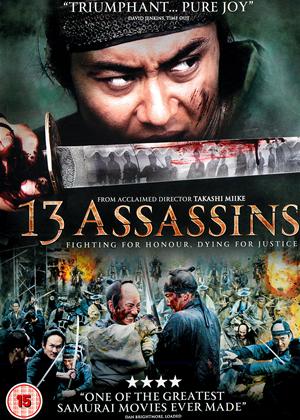 Favorite Films From the 2010s
18 films by cinemadiso

13 Assassins is a remake of a 1963 Japanese period drama about the last age of the samurai. Directed this time by Takashi Miike, notably most known for Ichi the Killer in 2001 and his contributions to the Dead or Alive series, the film tells the tale of a group of samurai who are enlisted to prevent the rise of a violent and power hungry lord to place of Emperor.

13 Assassins has a host of strong characters, played beautifully by their respective actors. Naritsugu, the evil and malevolent lord is truly disturbing, his actions and behavior leaning more towards psychotic than villainous. Whilst Shinzaemon is a true leader, his courage and the emotional scars of his time at war invoke genuine aspiration amongst the other samurai and audience alike. Also worth noting is the fearless and deadly Kujuro, whose performance manages to encapsulate both the grace and violent nature of the samurai. It is the characters that carry this film, their presences so strong due to the detailed first half of the film which takes it’s time in building each character’s personality.

This is all very well and good, however the intense detail makes the first two acts of the film a little over whelming and labored. Whilst the final act, where the 13 samurai face an army of 200 strong, lacks the elegance of recent Asian films like 2001’s House of Flying Daggers. The film is explicit in its gore and blood thirst, which may be vital and appropriate in the building of character but it, can be a little intense at times. However the film certainly ticks all the generic boxes, and is perfectly entertaining, but compressions to Kurosawa’s Seven Samurai are like comparing a standard Victorian terrace to Buckingham Palace.