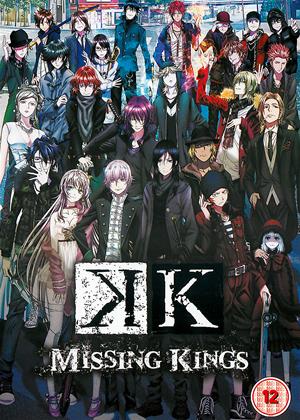 Synopsis:
A year after the events of K and its climactic battle, the Silver King Shiro is still missing and his whereabouts unknown in spite of the best efforts of Neko and Kuro to track him down. The movements of these loyal servants haven't gone unnoticed, however, leading to a run-in with members of rival clans that reignites tensions and power struggles between various factions. When a member of the now-disbanded Red Clan, Anna Kushina, is taken prisoner, the best opportunity for Shiro to be tracked down by Anna's impressive powers is lost. Thus, unlikely allegiances are formed between the Red and Silver clans to combat the new threats which face them both.
Will this unexpected alliance be enough to counter the Green Clan's top fighters, as well as its king?
Directors:
Shingo Suzuki
Producers:
Jamie Simone
Voiced By:
Daisuke Namikawa, Daisuke Ono, Tomokazu Sugita, Mikako Komatsu, Kenjirô Tsuda, Hiro Shimono, Jun Fukuyama, Kaori Nazuka, Kazuyuki Okitsu, Mamoru Miyano, Masakazu Morita, Miyuki Sawashiro, Satomi Sato, Takahiro Sakurai, Yui Horie, Yûichi Nakamura, Yûki Kaji, Kenta Tanaka, Johnny Yong Bosch, Robbie Daymond
Aka:
Gekijouban K: Missing Kings
Studio:
Anime Ltd
Genres:
Anime & Animation
Countries:
Japan

Sign up
Pokémon: The Movie: The Power of Us

Sign up
Is It Wrong to Try to Pick Up Girls in a Dungeon?: Arrow of the Orion

Sign up
Love, Chunibyo and Other Delusions!: Take on Me

There are sometimes when I enjoy jumping into a movie that continues on from a TV series. K: Missing Kings is not exactly one of them, unloading a plethora of characters you won’t know unless you’d watch the anime series prior. And, yet, I can’t help but feeling I’ve seen these characters before in the form of overused and often annoying tropes. In a sense, I feel as though I’ve got a firm idea of what the anime series K is all about. And it appears about as average as they come.

It’s a recipe all-too-familiar to sci-fi anime. The film takes place in an alternate reality of psychics, gangs, and kings, where mighty and good-looking soldiers battle with swords and dapper uniforms. They do battle most mundane for what essentially involves wielding generic psychic energies and having sword fights atop high skyscrapers, sometimes battling on the sides of them. There’s a battle of kings going on and a hidden psychic force amid some bitter rivalries but it intricacies of this plot are lost on a lamen such as I.

What I can gather from the story is that after some chaotic incident on an island, a hunt is on for the missing master of Yashiro Isana. Not much information can be found on his whereabouts but fight-hungry bad guys will pop up that start turning up clues. All of this essentially amounts to the rescuing of a young girl who has been caged and possesses a power she may not be able to control.

Okay, so I may not fully understand the narratives surrounding this society or its so-called king forces or why it’s a world with goofy looking skateboarders and ninjas. But one should be able to relate to the characters well enough that one might be enticed to check out this show. Sadly, K seems to be the most basic of cookie-cutter anime tropes. One villain is a very effeminate man with long legs, a seductive voice, and a constant chatter of finding eroticism in his many duels. Gee, I wonder what the many female fans are expected to do with this character. It gets even lazier with the addition of the ally Neko. And, what a shock, this character is cat themed for wearing a bell and summoning a giant cat for her battles. And you better believe she overreacts to everything and makes cat-like faces in her obligatory cutesy manner.

There was one moment when I almost had faith in this production being more wink-wink than going by the dusty old anime playbook. The kings at one point encounter a mysterious masked warrior that can easily pass through walls and quickly dart into battles. One person viewing the footage constantly refers to this person as a ninja, despite someone else claiming that the warrior might be something else entirely. Come on, let’s be honest; it’s a ninja. If only the film had a little more of this knowing cliche to avoid the all too dreary surprise of the ninja secretly being a woman. One listen of that garbled and changed voice and there’s not even the faintest twinge when one of the male characters is wide-eyed at the reveal.

K: Missing Kings is so strictly reserved not just for fans of the show but the most forgiving of anime fans in general, the ones who accept a cat girl named Neko as par for the course. But having been on this ride dozens, nay, hundreds of times before, I’m not willing to hop back on for another production where the animation quality is more profound than anything else in this routine anime.