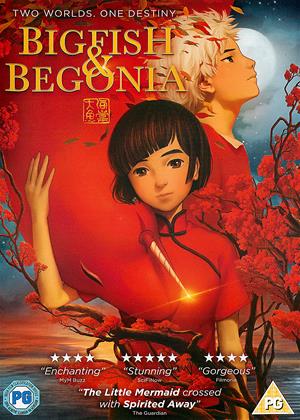 Synopsis:
In a world within our world, yet unseen by any human, the beings there control time and tide and the changing of the seasons. On the day Chun turns sixteen, she is transformed into a dolphin to explore the human world. She is rescued from a vortex by a human boy at the cost of his own life. Chun is so moved by the boy's kindness and courage that she decides to give him life again. But to do this, she must protect the boy's soul, a tiny fish, and nurture it to grow. Through adventure and sacrifice, love grows, yet now she must release him back to the sea, back to life in the human world.
Directors:
Xuan Liang, Chun Zhang
Producers:
Jie Chen, Daniel Chuba
Voiced By:
Guanlin Ji, Shangqing Su, Timmy Xu, Shulan Pan, Yuanyuan Zhang, Jiu'er, Lifang Xue, Jie Zhang, Xiaoyu Liu, Zhongyang Baomu, Yu Cheng, JB Blanc, Johnny Yong Bosch, Greg Chun, Todd Haberkorn, Erika Ishii, Guangtao Jiang, Shih Chieh King, Yuri Lowenthal, Cassandra Morris
Writers:
Daniel Chuba, Xuan Liang
Aka:
Dayu haitang / Da Hai
Studio:
Manga Entertainment
Genres:
Anime & Animation, Children & Family
Countries:
China, Anime & Animation, Children & Family

Reviews of Big Fish and Begonia

Big Fish and Begonia is a fantasy so light whimsical that its grander story comes off more misty with magic than a tidal wave of character and animation. It’s beautiful to be sure with portraying another realm where souls reside and spirits weave the human world from their kingdom of elements. But even with a tale of sacrifice and romance, the whole experience comes off too safe for what could’ve been a very stunning animated picture of mythology.

Based on a Chinese legend, spirits of a different dimension look up towards the human world as they become masters of nature they bring about on the planet. Every few years, some of the spirits are allowed to proceed to the human world as red dolphins for a short period of time. Chun is one of the girl spirits eager to go into the human world for the first time. But her visit leads to a love that could doom her, as she becomes infatuated with a boy that greets her upon her arrival. When the boy dies, leaving behind a saddened girl, Chun feels this is not right and decides to go against the grain of death by reviving the drowned boy.

Chun’s journey of resurrection leads her down a dangerous path. Seeking to restore life, she ends up giving some of her own to the shady soul keeper, a cranky and devious spirit of big lips, big nails, and one eye. In exchange for most of her own life, Chun receives the soul of the boy back but in the form of a dolphin that must grow to a certain size before he can return to the human world. And so Chun finds herself trying to hide a dolphin soul while keeping a secret her reduced life, confided in by her childhood friend Qiu who may have a thing for her.

Animation wise, the film is exceptionally beautiful. The depiction of the other world where spirits reside is a lavish one of much Chinese construction, warm colors, and amazing magic. A sense of fluidity can be felt throughout, where characters can take flight, summon elements, and conjure creatures with a mere graceful flick of the wrist. While the design of the characters appear rather typical of familiar anime design of big eyes and small noses, I must admit the movement and color are top notch enough to push the unoriginal designs as more pleasing to the eye than old to the senses. In particular, the soul keeper spirit has a liquid like movement to his strange magic that appears like something straight out of a Hayao Miyazaki movie. Theft, perhaps, but you may as well steal from the best.

But the film ultimately has such an airy and otherworldly field that I often found myself drifting out of its story about love conquering all. While the animation is the biggest feature, it can only carry a film so far without any major showstopper scenes. It’s not the least bit surprising that this movie was based on a short film as its very story seems well-suited for a shorter production. Much of the filler around Chun’s tale involves a lot of expositional dialogue about explaining most of her world and harping on the expected talks of love and not living long enough to see the future. While not terrible, these scenes come off as little more than predictable stuffing amid more pleasing scenes to the eye.

Big Fish and Begonia has all the grace of an animated wonder but not exactly any of the gravitas to have it go down as a classic. The best I can say of the film is that it does have a distinctly Chinese style and aesthetic to make it shine brighter than just being an anime knock-off. It’s just a shame that the story it develops ultimately comes off too safe for dabbling in subjects more spiritual and surreal.