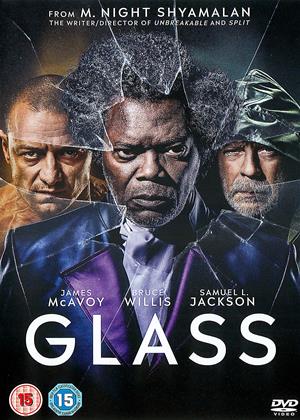 Total waste of a good cast & creative idea. But falos flat though.dull & uninspiring..The cast do well with a mediocre script & no cgi to speak of  required in this kind of genre movie..I won't be watching this again lol !

The sort-of joint sequel to Breakable and Split expects you to remember everything about those films but makes it not worth the effort. Bruce Willis has little to do and looks too old to do it anyway, Samuel L. Jackson literally says nothing for an hour and James McAvoy’s motormouth multi-personality character is simply annoying. They’re cooped up in a psychiatric hospital for an encounter group with a shrink who doesn’t believe they have supernatural powers. And they talk and talk and talk.

When they do get out there’s some brief fisticuffs before we get bogged own again in tons more exposition and discussions about superhero tropes and clichés. It sounds like writer/director M. Knight Shyamalan lecturing the audience and is laughably bad. He seems to have forgotten how to make movies. This is tedious from start to finish.

Sad that I spent 2/3rds of the film trying to work out what various references pointed to. If it had been made clear it was a sequel picking up from an earlier film (which was quite good) I'd have been right in the groove from the start. As a stand alone film it does not really work, you'd have to see the first one to get into it. Nowhere near as fresh and interesting as the first film but isn't that the way many 'cash in' sequels go?

I was looking forward to Glass. I wanted to see the finale where the three characters from UnBreakable and Split get together and what would result. THE result was... odd. SLIGHT SPOILER - I did appreciate how the psychiatrist tried to get the characters to doubt they were really superheroes - that was cool - but the finale promised something epic... and then (in my opinion) wimped out for a low budget small scale finish. I can only conclude that the director promised an in-depth character study that woudb't cost much (or the main actors took all the cash!) Look, all three actors are skilled and it was a pleasure to watch them - but honestly, we needed a big finish which didn't come.

A decent cast was wasted because this film was just boring and annoying. There can be a slow build to tension. But if it does not progress the story it is frustrating for the audience.

Watch it purely for McAvoy’s stunner of a performance. Definitely a film you should make your own mind up about.

One of the worst films ever, overlong, dull and weak in every sense. Please do not make the same mistake as we did and assume a good cast list list will deliver an entertaining watch, you will be disappointed.

Must see! - Glass review by SH

So good. Finishes off the trilogy nicely. Ignore the other reviews. Hopefully they'll leave it as a trilogy and not spoil it.

A clumsy, laborious and pointless sequel to Unbreakable (2000) and Split (2016) and director M. Night Shyamalan's attempt to create an original superhero world. The film starts reasonably well but it soon fizzles out into an anticlimactic mess. Bruce Willis returns as David Dunn, the main character from Unbreakable (actually an interesting gem in Shyamalan's canon), who was the only survivor of a train crash and has super strength and is able to read people's mind after one touch, he now roams the streets in a dirty raincoat as some sort of street avenger and is on the hunt for Kevin Crumb (James McAvoy), a schizophrenic psycho who kidnaps and murders young girls when he manifests as 'The Beast' (a sort of poor mans Wolverine). They get themselves caught and sent to a psychiatric hospital where sinister doctor, Ellie (Sarah Paulson) has some devilish plan for them but doesn't count on the dastardly Elijah Glass (Samuel L. Jackson) who has one of his own. McAvoy is clearly having a ball playing about twenty characters (I lost count) and obviously relished his time in the gym preparing for the role(s) but this attempt at a high gloss interpretation of the superhero genre is a damp squib. Watch the two earlier films as they are fun and weird but this one is a step too far.

There tends to be a scoffing and mockery of M. Night for his left-field twists but, let’s face it, they make his lesser films memorable. But I’ve grown rather fond of their lunacy that the lack of the surprise in Glass has me longing for the ridiculous. Consider how this film is meant to be a trilogy closure after the two previous films of Unbreakable and Split revealed that they were truly comic book movies the whole time, surprising you at the end. Unbreakable ended with the origins of hero and villain. Split ended with the shocker that it exists in the same universe. And now we come to the end without any shocker of genre-shaking conclusions. It starts as a comic book movie and ends with a comic book movie, weaving twists better suited for the genre than bringing something new to the table.

It’s a bit of a downer considering the strong players assembled. James McAvoy returns from Split as Kevin Crumb, along with all his 24 different personalities, from the kid-like Hedwig to the viciously super-powered Beast. McAvoy perfectly embodies all these characters with an ease that he’s still just as creepy and fascinating to watch. Chasing after this maniac is David Dunn (Bruce Willis), the strong man from Unbreakable with the weakness of water. Just when the final showdown is about to be waged, the two are arrested and whisked away to a mental institution where the two meet Glass (Samuel L. Jackson), the man who believes himself to be a supervillain with his fragile bones and incredibly smart mind.

Sarah Paulson plays a therapist specializing in these types of personalities and doesn’t by Glass’s logic of how the comic book world has merged with reality. She tries to explain away their actions with convincing arguments that make us question how real these people believe themselves to be. Glass knows no better; he’s not only sure of these powers but is counting on fulfilling the comic book narrative of having Dunn and Crumb finish their match of strong man versus crazy man. To stop him, the friends and survivors of these patients will have to, and try not to laugh at this, uncover the mysteries behind comic book lore to find out his plans.

Glass has plenty of potential to be a real commentary on the current climate of superhero cinema. Paulson’s character rejects the notion of superheroes as childish distractions while Glass tries to evoke it through the evils of the world that doubt what they do not understand. It’s rather unique when accented with McAvoy’s fantastic performance and Jackson’s calculative moves hidden behind a dead expression, along with Willis, well, just being Willis.

But even with the subversion of Glass’s plans, where the promise of a big battle atop a giant tower goes unfulfilled, the climax comes to a baffling conclusion that seems more tired than transformative. Consider how Kevin is more appealing when concealing his inner beast within the dark shadows of a warehouse, only to unleash it in the daylight of a parking lot with far less intimidation. McAvoy is a great actor but there’s only so much he can do as a shirtless man trying to imitate the hulk with his car-flipping abilities and mighty roar. Watching him have a fist fight with Bruce Willis in the daylight is more strange than compelling. But on in that over-the-top M. Night kind of strange.

Of course, there is a twist but since Glass is now so deeply committed to the comic book genre, it’s a twist that fits too well into its world. And rather than offer any sort of unique commentary on superheroes, supervillains and the nature of comic book culture, Glass merely spins its wheels to provide closure and more or less rides that pop culture train than offer up anything insightful. When even the expected twist is a downer of missed opportunities for both intelligence and insanity, the trilogy closure acts as little more than a period to a trilogy claimed by M. Night to be 19 years in the making.