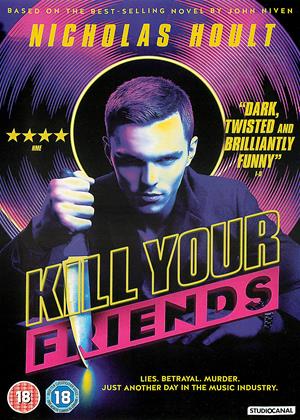 Reviews (1) of Kill Your Friends

Nicholas Hoult is, as usual, excellent - and even the ever-annoying James Cordon can't spoil this film!

The shark-infested music business is shown in all its amoral horror - as it has been many a time before in movies like 'Killing Bono' or even 'That'll be the Day'. This has a 90s twist though and in-jokes about shoe-gazing music and German techno are spot on!

Oddly, the movie is now almost nostalgic - since 1996/7 when this is set, the price of music has halved and the size of the record industry has halved too (half the staff now too). Internet downloading certainly nailed these rich kids! Power to the people now - who download for 99p an album track, so no need to buy a £10 album at all. Oh and the singles market has now utterly collapsed too.

I am not sure whether to give this 3 or 4 stars - because although enjoyable it's not all THAT great. But I shall give it 3.5 stars (the half is for being mercifully short and for some great tunes on the soundtrack) and round that up to 4 stars.