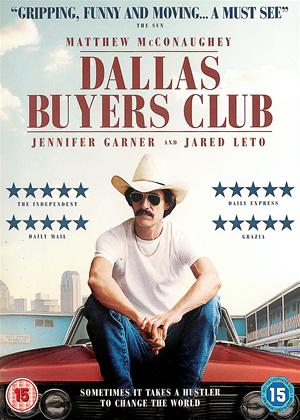 Great performance by the lead, backed up by a great script leading us on a roller coaster journey against preconceptions and prejudice.

Really enjoyed, corruption in US drug/health system shown up here., watch it and learn how money rules over lives.

Fun it ain't - Dallas Buyers Club review by BE

Although he mellowed somewhat towards the end, the main character originally presented as hedonistic and with very little charm. I admired his application in seeking out appropriate pharmaceuticals for his illness to help himself and others but apart from that, he was not very likeable. For all that, it was a good production with Jared Leto excelling in his supporting role. One to watch.

This was a really good film, I was slightly apprehensive that it would be depressing, but it's not, leads were great, especially the guys.

Watch it , that's my advice.

This a good movie - Dallas Buyers Club review by CS

Oscar winning performance from Matthew and although AIDS being a serious subject some humour to lighten the story. Found it held my interest for the full 2 hours. Would recommend.

Towards the end McConaughey leads a graceful journey into the American drug administration authority. This 1980's HIV infected rodeo, makes an educated move to challenge his 30 day prognosis.

The buyers club is based on true story, of human collective to get vital treatments, from Israel - Mexico Ron gains an increasing foothold on the then knowledge, beyond AZT Ron finds a solution, hospital clinical trials fail to fully address the disease.

Together they tackle issues of prejudice traller trash, class sexuality and ignorance.

A fantastic cast, the physical transformations are huge, McConaughey and Jared aces at a creditable performance.

With Matthew McConaughey as a stick thin HIV sufferer and Jennifer Garner – who in my opinion tries her best to pick reasonable movies in which to appear – Dallas Buyers Club was set to be more impressive than in fact winds up being; following the traditional and somewhat simpering melodramatic narrative of the terminally ill patient movie Dallas Buyers Club plays it all a little too safely for my liking.

The story follows sex-addicted, drug abuser and party boy Ron Woodroof (McConaughey), a man who despite the gentle deterioration in his health, lives the party life until, following an accident at work winds up in hospital and is diagnosed with HIV. Determined to fit against such a “gay” disease Woodroof enrols himself in pharmaceutical trials for a pioneering drug called AZT and though his symptoms improve the company is eventually forced to pull their product. Searching desperately for something to help delay his inevitable decline Woodroof travels to Mexico to score some more AZT; whereupon he is informed that the drug is probably doing more harm than good and he ought to try another, alternative medicine.

Thrilled by the improvement in his health Woodroof decides to return to America to attempt to sell the new, unlicensed, drug to other sufferers. However his path to curing AIDs (and making a profit in the meantime) is skuppered by the legislation and policy enforced on behalf of the drug companies who have a stronghold on the U.S economy.

Though there are plenty of areas within the movie that provide the potential for an interesting social investigation and offer the opportunity for a great deal of creative experimentation on behalf of the writers/director, Dallas Buyers Club decides to play things almost entirely by the book; keeping things clear cut and black and white. Here the big drug companies are the bad guys, the alternative medicine is the only hope of the truly ill and the homophobia surrounding diseases like AIDs and HIV is only barely explored.

Thankfully the performances from the lead characters, McConaughey (who lost a painful amount weight for the role), Garner, Jerad Leto and Griffin Dunne ensure that the film is at least watch able, marking the emotional moments as poignantly as possible and attempting to raise awareness surrounding such a taboo subject. The narrative with which they are working however gives them little to develop upon and ultimately their efforts are somewhat wasted.