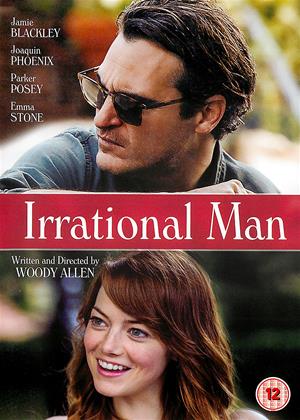 I didn't think I'd enjoy this. Most thought Allen had gone off the boil. But I did especially the comupance at the end. Worth the watch.

Thought it was very unengaging, and didn't manage to watch it to the end. If you haven't seen it try something like Blue Jasmine to restore your faith in Woody Allen.

Until I watched Cafe Society recently and which, to my surprise, I rather enjoyed because it was more like vintage Allen, there had been a lengthy hiatus in my Woody watching. Partly, I suppose, because his more recent films are no longer given general release (there are no Independent cinemas where I live) and also owing to the demise of LoveFilm. Thank goodness, then, for the arrival of Cinema Paradiso to provide access to an excellent archive as well as giving an opportunity to see films that otherwise would be unavailable to most film fans.

Irrational Man, however, was not to my liking at all. Not serious drama such as Crimes and Misdemeanors, and certainly not showing the originality of Annie Hall nor the warm romance of Hannah and her Sisters. These are, of course, vintage Allen but Midnight in Paris made it obvious that he still has much to offer.

Not here, however, and I quickly lost interest in the college campus setting and in the self-indulgence of the Joaquin Phoenix character. Better luck next time, I hope.

Considering the material Woody has mined from his single term at NYU, it is perhaps surprising that this campus film was his first. It is set at a small university on Rhode Island, where the arrival of notorious philosophy academic Abe (Joaquin Phoenix) unleashes debate about his teaching methods, and his affairs with chemistry professor Rita (Parker Posey) and student Jill (Emma Stone). And his reckless depression.

The film proceeds like an illustrated philosophy essay (with lectures) as existentialism is played off against Kant. Abe chooses the former when he takes direct action to poison a corrupt judge. Jill adopts the latter when she threatens to turn him in.

The characters are a touch stereotypical, though Phoenix's charisma makes much of his role. Stone and Posey are both appealing in support. Once again, the film is beautifully photographed by Darius Khondji, who has done fine work with Allen.

The intellectual nature of the film isn't much of a stretch. What makes Irrational Man fascinating, is the addictive tension that Allen creates, and the material he uses to illustrate his ideas. Abe decides his life can only have meaning if he acts, if he intervenes to right a harmful wrong. And with the red warning light for democracy blinking across the world, the attraction of taking direct action to influence events has greater appeal, and gives the film some contemporary political relevance.

Lacklustre - Irrational Man review by BE

Just about about holds the attention but expected more from this Woody Allen movie. Unfortunately, Joaquin Phoenix - usually turning in sterling performances - only as good as his script and character, which weren't up to much.