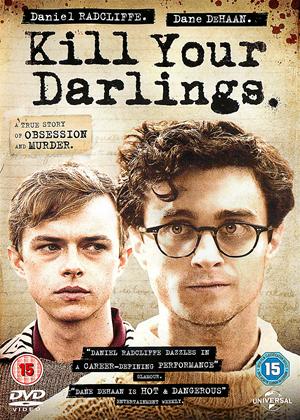 Reviews (3) of Kill Your Darlings

Interesting and entertaining film - Kill Your Darlings review by PV

I liked this film. It's well-scripted, well-acted and recounts the little-known tale of a murder within the beat poets clique in the 1940s.

The period detail is interesting; not sure how much the characters are true to life though.

But I never knew how that event inspired an early Jack Kerouac and William Burroughs novel.

Full marks to Radcliffe for his performance; Dane DeHaan plays the Bosie characters to an older guy's Oscar Wilde, and not sure how true to what really happened all that is anyway. Other characters too stand out - the cold fish spoilt rich kid Burroughs and Kerouac's testosterone-pumping thrust of a performance. This film is WAY better at portraying him than others I have watched.

But this film stands on its own - though, in reality, these beat poets were really up themselves! This movie is more interesting than much of their dire pretentious poetry, for sure.

I don't see why anyone has an issue with modern music and sound effects being used in a period movie - what a terribly quaint and puritanical attitude!

Could Have Been Better - Kill Your Darlings review by KW

An interesting film covering the Beat Generation during their time at Columbia University, but with such a wealth of characters to cope with the screenplay within the limited time it had could only gloss over their frailties as well as their good points. The fact that they survived and became successes in their right, is sort of glossed over, which for me is a failing of the film, assuming we already knew what had become of them.

With a title like 'Kill Your Darlings' I was expecting a much more taut, thrilling and dramatic film about a real-life murder.

Based on a true story, the movie focuses on the rise of the 'Beat Generation' writers Allen Ginsberg, Lucien Carr, William S. Burroughs & Jack Kerouac as they plan to go against the grain of conventional prose and indulge themselves in a new wave of literature.

For the most part, the film plays out like Fight Club at Columbia University, except there's no fights, there's no conflict and there's no real drama, just a group of rather unpleasant, self-obsessed characters talking pretentiously and marvelling in their own genius. The only real rebellion they participate in on-screen is stealing the university's library keys to put banned works like Lady Chatterely's Lover on display.

One of the biggest faults I found with the film was how openly gay Ginsberg & Carr's characters were. Perhaps they were that way in reality, but considering the events in the story took place at a time when homosexuality was not just taboo but forbidden! I'm sure the entire point of the Beat Generation school of literature was to express their lifestyle choices through their writing. In my opinion, the film would have been much more powerful if the characters were wrestling internally with their sexual orientation, instead of leering salaciously at each other throughout the duration.

A murder does takes place in the story but it's very much on the periphery rather than being the integral part of the story that it should be.

Overall, the film is just a giant snorefest despite a handful of good performances, especially Dane DeHaan as Carr. Daniel Radcliffe, aside from resembling a young Allen Ginsberg is incredibly miscast (perhaps it's because his acting has no real depth. All I see is Harry Potter.)

Worth watching if you want to see a schoolboy wizard having his first gay kiss, but there's no entertainment or even educational value in this film. It's merely an independent film intended to shock with no real merits aside from some decent acting performances.

Also, the intentional anachronisms of having modern songs playing over the soundtrack borders upon criminal.

Daniel Radcliffe makes further attempts to put his celebrity making role as Harry Potter behind him in this depiction of a life changing event that effected some of the that generations most influential and forward thinking minds. The faces of the Beat generation, a group of writers and artists who came to prominence in the 1950’s, are all well represented in John Krokidas’ first feature film Kill Your Darlings.

Radcliffe stars in the central role as the unknown genius Allen Ginsberg, who finds himself complicit in a murder committed by fellow, albeit lesser known, Beat-er Lucian Carr (Dane DeHaan). Though the back story and general narrative of Kill Your Darlings ought not to be particularly relevant in what one would expect to be an exploration of the inspiration, drive and mastery of some of the greatest minds of the 20th Century, it is in fact the narrative that is the most tangible thing about the entire film. However; other than the brief synopsis offered in the opening lines of the above paragraphs I find myself at somewhat of a loss of what to say about Kill Your Darlings. Ultimately it is a rather tawdry crime drama populated by people who would one day be famous.

What is worth mentioning in the film is a couple of performances, Radcliffe, who many readers will know is one of my least favourite people, absolutely tramples all over my pre-conceptions in his portrayal of Ginsberg. He manages to capture the dichotomy inherent in Ginsberg’s mind, desperately insecure but also ultimately so sure of the meaning of life, he depicts a troubled young man whose troubles lie both in his own emotional psychology as well as the trauma following Carr’s crime. Alongside Radcliffe Dexter’s Michael C. Hall is excellent and sadly underused as the ill fated lecturer who, obsessed with Carr, follows him to New York where he would meet his end.

Though there is a great deal of potential in the characters present in Kill Your Darlings ultimately the content lets the piece down; with little time spared for the contextual setting of the film – excepting a brief word from one tutor to Ginsberg that, if he finds studying so tedious perhaps he would be happier dying with his brethren in Europe – Kill Your Darlings is left with little more to build upon than the echoing noise left by Carr’s crime. With such potentially interesting characters on offer this really is a bit of a waste.