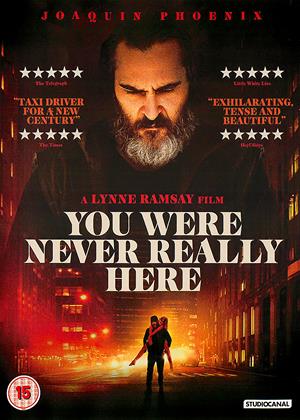 Rent other films like You Were Never Really Here

Reviews (28) of You Were Never Really Here

The worst film I've ever seen! - You Were Never Really Here review by GK

This has got to go down as one of the worst films I've ever seen!

You can't hear/understand half of what's said.

The story doesn't explain itself and nothing seems to happen.

Don't waste 90 minutes of your life on this!

8 out of 14 members found this review helpful.

Not Great - You Were Never Really Here review by Doug

Speed through it - You Were Never Really Here review by RW

One of the few films I have watched speeded up three times. At this speed you will miss nothing and waste only 30 minutes of your life.

Phoenix plays Joe, the unhinged gun for hire. Haunted by flashbacks from the army and a totally abusive childhood, it is a constant battle not to take his own life. He is a totally ruthless and violent professional though, despite resembling a zombified junkie. Although he will not bat an eyelid after caving somebody's skull in with a hammer (his weapon of choice), he has a caring sentimental heart. This kindly heart manifests itself in his looking after his elderly mother and caring for the young girl, above and beyong the care of duty, who he's been hired to find and rescue.

A superb performance by Phoenix makes it completely believable that Joe is in a living hell. Similarly, the young actress is terrific at bringing her inner horrors to life, by her own unhinged demeanour.

The mental anguish of the two above is captured brilliantly through the outstanding direction of Lynne Ramsay, aided by a haunting, strange and superb score. Making one hellish, hallucagenic nightmare a cinematic reality.

Call for a taxi driver. - You Were Never Really Here review by NC

Not Taxi Driver. Been done. Pretty pointless film. Tries to be moody and clever, but best just stick to zombies and heads rotating etc.

Truly Dreadful - You Were Never Really Here review by DH

One of those films where the director is obviously trying to be clever by not making it immediately clear what is going on.In fact he was so successful that after 20 minutes, not only did I not know what the hell was going on, I cared even less. So I promptly switched it off to avoid wasting a further minute of my time watching this moronic garbage.

I would strongly recommend that you don't even bother.

Absolute rubbish - You Were Never Really Here review by TH

What trash. Real rubbish. What a waste of my rental. Disgraceful that anyone would stock this tripe. A complete waste of my evening and this does not live up to any positive reviews. This film is not worth watching in anyway shape or form. Don’t waste your time. This is an awfully acted poorly filmed and stupid meaningless plot with nothing in the way of any worthy ending that is worth ‘holding on for’ waiting for something of some good to come from enduring the films boring and pathetic duration. A long boring stupid waste of a film. Just crap.

The perfect recipe for annoying someone who loves the crime/action genre ... - You Were Never Really Here review by Schrödinger's Cake

This film isn’t a cookie-cutter Hollywood blockbuster. There are long tracts of silence. Entire dialogs of simple glances and stolen smiles. Most of the action is Hitchcockian off-screen butchery. And it starts with a reeeeealy slow opening reveal that leaves you wondering what the hell is going on for the first quarter of the film.

In fact, it’s almost the perfect recipe for annoying someone who loves the crime/action genre. New Oscar category. Take a bow.

However, I enjoyed the departure from the scheduled action-hero timetable, and was happy to kick-back and enjoy the gorgeous camera work that was the backdrop to Joaquin Phoenix’ study of a tortured combat vet. Stoic as his character is, and seemingly only ever a coin-flip away from taking his own life, I quickly felt an odd kind of empathy with the ragged, broken shreds of his life.

Yes, it’s an arty film. And no, that's not necessarily a bad thing.

Soporific - You Were Never Really Here review by KF

Well I managed to watch about half the movie, fell asleep a couple of times, I just did not understand what it was all about, muddled plot, average acting and no real story line, avoid unless you suffer from imsomnia, it worked for me in that respect.

Imagine if someone was given the keys to the Taken franchise and given full reign to reboot the formula into something better; a movie where the quest for a missing girl wasn’t as simply portrayed as a predictable series of shootouts and showdowns. Kills are met with a grit and fear for the taking of life rather than points on a scoreboard. Actions are carried out in a very refined manner so our eyes are always led rather than blurred. In other words, everything that a hitman revenge picture can and should be.

Part of the appeal is that writer/director Lynne Ramsay put more faith in our eyes for visual clues than our ears for banal action movie babble. We’re introduced to the hitman Joe, played by a mostly silent and fully-bearded Joaquin Phoenix, as a simple man with a dark past. He lives with his ailing mother, sharing small smiles amid the television. Joe keeps his work quiet, using few words with his clients and not a peep with his targets. When not on the hunt, his mind is a mess of flashes about murder during war and suffocation of children, memories from his past that he struggles to keep at bay, relegated to quick shouts of terror through his head.

His latest mission seems like a standard one of retrieving a kidnapped senator’s daughter. And even though it will eventually lead into a bigger plot where Joe becomes a target, I expected this route as well. No matter. Joe rolls with the punches with little more than a hammer from the hardware store. His colleagues will become targets in a political conspiracy of murder, but Joe isn’t interested in peeling back all the layers of the why with the worst of humanity. He can only see a man who needs killing and a girl who needs saving.

I love the way Ramsay approaches nearly every scene. Take for example the violent scenario where Joe works his way up an apartment building brothel, killing his way to the girl. Action movies have conditioned us to see every juicy money shot, but Ramsay keeps the massacre somewhat tasteful and terrifying with a distance. Most of Joe’s kills are either off-screen or hidden and blurred as we watch the carnage unfold almost silently from security camera footage. This may make the film seem like a tease, but it actually breeds a grander sense of anticipation. There will be other scenes where the camera gets closer with grittier violence, catching us off-guard for one of the bloodiest and most brutal scenes that smacks one over the head with the same force of the Joe Pesci’s execution in Goodfellas.

Every kill feels as though it means something, focusing on the life that leaves the mortal coil. Joe doesn’t merely kill and move on, lingering long on someone who was once moving and now lies a shell. When two assassins enter his home, he wounds one of them to live long enough to talk. But rather than end his misery, Joe sits with him and gently starts singing. The two continue the song until one of them is no longer for this world. Joe wants to hold onto life, for as hard as it may be as suicide continues to plague his thoughts like a nagging itch begging for an easement.

Few action films are ever this contemplative with the chaos, favoring the blood be pumped rather than take in the situation. You Were Never Really Here lets us inside Joe’s mind, showcasing that there’s more behind the beard and bullets than a ruthless killing machine. It’s easily one of the best roles for Joaquin Phoenix who tells us so much about this fractured figure without so much as a word.