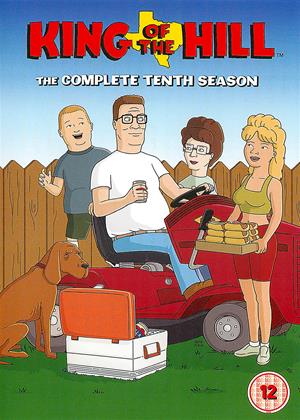 Reviews of King of the Hill: Series 10

Similar to the last season, series 10 of King of the Hill takes some absurd routes that venture long past the simple silliness of a dull propane salesman who can only talk about one thing. Season 10 takes the show in some oddly unorthodox areas for such a show as this that it hardly seems to resemble any shadow of what it once was. It used to be stories about family squabbles, medical issues, and the odd corners of suburban living. Now we have a series with ancestral whores, clown makeup, and dog poop.

"Hank's on Board" just feels too standard for a Hank Hill episode. It’s yet another episode where Hank realizes he’s the dullest member of his foursome of friends. This has already been covered that the writing is pretty much on the wall will go about. Hank will be proven to be dull, sure, but also dependable in dangerous situations.

More job episodes are present when Bobby becomes a newspaper boy in "Bystand Me", Bobby becomes a bum in "The Texas Panhandler", and Rainy Street becomes a baseball team in "You Gotta Believe (in Moderation)". "Bill's House" is your standard roommate feud episode, even referenced in a sitcom at the start of the episode as if to say “look how much we’re going to subvert this trope” only to do not a whole lot with it aside from once more bullying on Bill.

"Harlottown" is mostly just a sex-comes-to-Arlen episode when a historical discovery is made that the town was once home to whores and known for its brothels. Nothing much comes of this in future episodes. "Orange You Sad I Did Say Banana?" feels like another half-attempt to tackle racism but this time within the insular communities when Kahn is declared to not be Asian enough by his upper-class peers. Khan’s devotion to embracing his Laotian roots goes to such a ridiculous length that it becomes more thematically lost.

Then there are more of weird changes to routine that are brief and bizarre. "Church Hopping" has the Hills experience the exhausting nature of a mega-church. "24 Hour Propane People" has Buck Strickland depressed with work that he adopts all play and no work lifestyle for his team that makes them all the more bitter.

I’m not even sure how to explain the appeal of "Hank's Bully". Essentially, Hank is bullied by the kid of the new neighbors who constantly makes his life hell. So, you know, like Dennis the Menace. The kids even resort to strange insults by saying that Hank has “dusty old bones filled with green dust.” Hank later questions this humor with his friends but the audience is questioning as well. Why was this funny? Is it funny because it’s not funny? Also, Hank’s behavior is childish in this episode compared to how he has handled kids in previous episodes.

The only, and I do mean the only, episode with some grounded sense of worth is "Edu-macating Lucky". Lucky wants to prove himself to Luanne before he can ask her hand in marriage and decides to try out for his GED. But with Peggy teaching him and fearing the worst from somebody as poor as Lucky, she sabotages his education. There’s some interesting talk about codes of honor and questioning of tradition that makes Lucky out to be one of the more morally driven characters, like a cheaper Hank Hill.

It’s just sad that the only highlight of such a season is its finale. King of the Hill can still be pretty funny this season but it sure does hit a lot of duds before it ever manages to get on base.