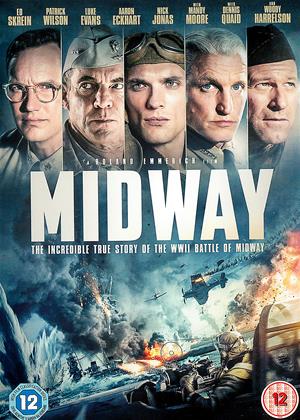 There have been several attempts to tell this story fom "Tora! Tora! Tora!" (1970) ,then "Midway" (1976) to this one . They all have been a case of diminishing returns if you ask me. This one does at least try to rescue the contribution of the pilots and give them at least as much weight in the story as the navy , but that's about as positive as I can be about it. Otherwise this is war in pastel colours and soft focus as only the most average CGI can give you ( thats not to say it isn't good but such is our standards with CGI these days this does feel a little off ).

In truth I still think we are waiting for this story to be told well , but I'm not sure it ever will be - Midway was a huge battle and most of the ships were never in sight of each other ( despite what this movie suggests ) and the respective fleet commanders were left to make nuanced decisions from incomplete and inaccurate information. In truth the battle really turned , against the overall balance on the day, from a lucky piece of timing for the Americans (10 minutes or so ) in a battle that lasted all day. I'm not sure that's a story cinema can tell well , you might be better off trying to find a good book about it .

If historical accuracy is irrelevant to you and you are just out for an adventure movie this might suit but it's not really more than that.

I've always been quite fond of the 1976 film which, as I recall, used newly created content mixed with real life archive footage.  So, I was really looking forward to seeing what nearly 50 years of cinematic progress would yield.

It's always possible to pull war movies apart as they can never provide the detail and accuracy of a 500-page book or a good documentary series, yet I really enjoyed this and its honourable efforts to portray the roles of so many people in a vital episode of the battle against tyranny.  The special effects vary a tad from breathtaking dive bombing sequences to some slightly cartoonish explosions but the overall result is still very impressive.

My advice is to watch it once to get an overall sense of the narrative, then dive into the excellent special features, and finally watch the film again.  It's unusual for me to view the same film twice in a weekend but I really thought this was worth it.

Great action and big scene graphics, great story based on historic events (loosely) with the story of the characters involved (quite a bit of poetic licence) making this a very enjoyable film for me.

I classify films I watch into either “movies”or “films” , movies are what you watch to be entertained, and as you might guess a film is something you watch that is memorable and that you use as a bench mark helping you judge other things. I wasn’t expecting this to be one of the latter but it nearly was. The background plot line was a bit thin, the acting was a bit wooden, but the cgi and action scenes moved it from lots of also ran movies to one that I recommend you watch. If you enjoy war genre then you should watch. Just sit back disengage you’re film critics brain and enjoy a film that you will probably want to watch again.

The worst kind of war film.

Terrible acting, graphics like  a video game ( you ride on the bombs as they are about to hit a battleship) ,  screenplay that is a joke [ “ before Pearl Harbour the WHOLE of Europe had been overrun by the Nazis ( never heard of the U.K. and its allies ? ) it was up to the USA to save the world grrrrrrr ]

It’s the sort of movie where all the young Americans are lippy , refuse to follow orders so they are “cool” ........

I love a good war film, but this one was awful.

A solid modern take on the old-school war film that many people will unfairly dismiss as a politically incorrect boys’ gung-ho movie. This is so determinedly authentic even the corny scenes are true. What screenwriter in his right mind would make his hero a gum-chewing pilot called Dick Best? But he actually existed, as did all the main characters and all the plotlines. The moving finale shows you the real people that the film portrays.

Much of the Pacific War is now forgotten or unknown to a younger generation. It deserves to be better remembered… Pearl Harbour, the Coral Sea, the daring Doolittle Raid… This film shows what a fascinating and bloody battle arena it was. Shame on those who denigrate it for its depiction of heroism.

Hard to believe all the mayhem and destruction we see (on land, sea, air and undersea) was done on a sound stage and in post-production, but the end result has an epic quality. You’ll believe you’re in the midst of it. Director Roland Emmerich (Independence Day etc.) has long been adept at this kind of scale. The excellent DVD Xtras will make you realise what a labour of love this film was and make you want to watch it again with even greater appreciation.

not impressed - Midway review by dave

I think this holds the record for cramming every cliche known to man into one film.

I managed to watch till the end but would never recommend to anyone.

Yahoo for the good old US of A

Loud, long and action packed this is another of those history lesson war films that used to be very popular back in the 60s & 70s, e.g. Tora Tora Tora (1970), The Longest Day (1962) but with the benefit of modern digital CGI which renders the aerial combat sequences particularly impressive. It's all gung-ho back slapping heroics with the usual stereotypical characters many based on real persons and some are vaguely annoying not least Ed Skrein as cocky, ultra brave pilot Dick Best. Equally though there are some interesting aspects to be enjoyed in particular Patrick Wilson as the Intelligence expert Edwin Layton. Director Roland Emmerich , a past master at the big, effects laden epic, tones down the flag waving and does give almost equal balance to the Japanese side in this recreation of the huge 1942 naval battle for the island of Midway, a turning point in the pacific war. There's a prologue recounting the Pearl Harbour attack and the Doolittle raid which is an improvement on the dire Pearl Harbor (2001) and like all these films there's the token female character waiting at home looking anxious that could have been removed entirely. Support cast is ok including Woody Harrelson, Luke Evans, Dennis Quaid and Aaron Eckhart. Anyway, this is all a bit similar to other war films of this type, it lacks depth and meaning but it looks impressive and keeps you watching.

Too much special effects also tried to cram in too much. Tried to include Pearl Harbour - Tora, Tora does it better, the Doolittle Raid is mentioned. Should of included more on on the planning like the 1976 Film. Too much action, not enough background info. Very realistic on details though.

Seems longer than the battle - Midway review by Pete W

Good points - pretty historically accurate, effective CGI. Bad points - script, usual US assumption that the whole war was won by one or two (admittedly brave) individuals, too long by at least half an hour, failure to acknowledge the element that luck played in the victory and how badly it could have gone wrong.

A very interesting attempt at capturing a highly significant military engagement between the US Navy and the Imperial Japanese Navy in 1942. It covers accurately a very complicated engagement that relied as much on luck as good judgement and found the Japanese suffering markedly from hubris. It shows fairly well, if you know what to look for, the strengths and weaknesses of the opponents e.g. the poor quality of US torpedoes and torpedo bombers(Devastators); the power of the US Navy dive bombers( Dauntless);the Japanese lack of radar; the excellence of the Japanese fighter(the Zero).

The scripting, acting and CGI are all first rate and the principal cast members all perform superbly; my personal favourite would be Woody Harrelson as Nimitz. Given enough money this film could have been twice the length for me. If you are interested in WW11 this is a film that is well worth watching at least once.