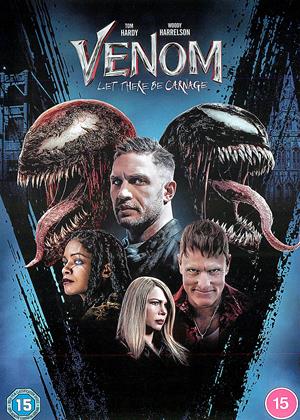 Rent other films like Venom: Let There Be Carnage

Reviews of Venom: Let There Be Carnage

I didn’t much care for 2018’s Venom but there was some potential there. The few times that the film settled down from trying to be an overtly dark and stumbling horror picture, the buddy aspect between journalist Eddie Brock and his parasite alien symbiote of Venom were actually quite a treat. I particularly dug the scene where Hardy hops up into a lobster tank and starts eating living lobsters in order to satiate Venom at a restaurant. A return to Venom needs more of that.

Thankfully, Let There Be Carnage understands this. It’s a sequel that realizes the real draw of Venom is not the intrigue and allure of the alien symbiote but the buddy aspects that make it a real treat of an anti-hero picture. Trimmed to a brisk 90 minutes, this film manages to become more a pleasant diversion from the usual comic book tales instead of an overly long origin story where the only highlight of the character is watching Venom bite off heads. It is, perhaps, why so many fans got all heated that this film would be rated PG-13 instead of R, as though Venom can’t be engrossing unless the blood and guts are present on the screen (not sure Venom was known for his wicked language).

While you won’t get a brutal comic book movie, you will get one brimming with a chemistry that’s cuter. I loved how much of a team Eddie and Venom become in this picture, with Tom Hardy once more proving to be a brash journalist. He constantly has a feud with the pressuring police force and has to struggle to keep Venom’s desire for flesh at bay. Venom, however, needs to eat and the reliance on chickens and chocolate for his specific nutrition to survive is not sufficing.

The two clash exceptionally hard when handling the death row case of the unhinged Cletus, played by a perfectly sinister and cackling Woody Harrelson. It’s only once they solve the crime of Cletus’s hidden bodies that the two realize they can’t quite connect and a split occurs. They also split at the exact time that Cletus gets himself a taste of his own symbiote and becomes the monster of Carnage. He escapes from prison with the intent to marry his childhood sweetheart of Shriek (Naomie Harris), a woman with a killer voice. Of course, her power of voice complicates the relationship since symbiotes are sensitive to sound.

Directed by Andy Serkis, this film is leagues ahead of the first film. It’s shot in a compelling enough way so that the titular anti-hero isn’t obscured in darkness or smoke. All the fights look good and you can easily tell what’s going on, even in scenes where Carnage seems to be all over the place with multiple tentacles of slop. The humor is incredibly adorable for when Eddie and Venom bicker. I particularly enjoyed how Venom attempts to cheer Eddie up after a breakup by making him breakfast while the radio is playing. Venom just ends up making a mess but Eddie doesn’t seem to care as much. After all, Venom means well.

Venom: Let There Be Carnage goes the extra mile to focus more on relationships to the point where Eddie and Venom are on the brink of making out. There’s this overarching embrace with being yourself and highlighting queer culture, sometimes overtly as when Venom attends a rave in a new host body and literally states “I’m out of the Eddie closet.” All of these great little moments make up for the fact that Cletus is a villain of simple motivations and that the mid-credit Easter egg is designed to make Marvel fans get all excited for the next Spider-Man movie.