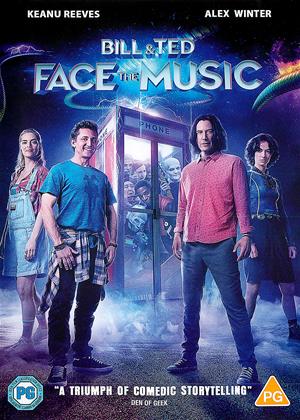 Rent other films like Bill and Ted Face the Music

Reviews (5) of Bill and Ted Face the Music

Avoid - Bill and Ted Face the Music review by AW

Oh dear, the original Bill & Ted wasn't a masterpiece but it was a bit of fun and the idea of travelling through time for a history project held together as a story.

This is a bad film 'Bill' and 'Ted' seem to be playing exaggerated versions of their original selves as do their daughters.

It's not funny, the story is poor, such a shame was looking forward to it but it just doesn't work.

Not excellent! - Bill and Ted Face the Music review by PC

I enjoyed the original films, especially Bogus Journey, but this lacks any of that freshness or a script with enough funny moments or lines. The cast try their best but the whole things seems to forget what made the characters funny, trying to shoe-horn their daughters into the film is achingly unfunny. I think I've given two stars because of my nostalgic feel for the originals.

I enjoyed the first film and the second movie was fun if slightly silly. This third in the series if not really needed. The fun has been zapped from it and it feels like both leads are going through the motion. Also hoping this doesnt spawn any further movies featuring the daughters. Overall it's ok but not one to remember.

Abysmal - Bill and Ted Face the Music review by si

Absolutely dreadful cringeworthy rubbish. What on earth is Kineau doing demeaning himself with this garbage..gotta be one of the worst films I have ever had the misfortune to encounter

A most bodacious and excellent film. - Bill and Ted Face the Music review by RM

Totally silly fun, The idea of the guys daughters being so clone like was genius! A totally ludicrous story line that held together well all about misunderstanding and desperate timing, a sure fire recipe for a comedy, it would be impossible to write a full review without spoilers, so just watch it and make your own minds up. PARTY ON DUDE!!!

It appears as though long-awaited sequels usually tend to be the best from franchises that have had some time to breathe. Bill & Ted have reached their three decades since first gracing the screen and return with much of what made them so enduring. It wasn’t just about dumb teens slinging California stupidity but trying to do the right thing with music, empathy, and being excellent to one another. Their return walks a whimsical line between being more of the same and an evolution of the characters at the same time.

Thankfully, the duo have been quite busy since we last saw them in Bill & Ted’s Bogus Journey. They continued partying on with their band Wyld Stallions, accompanied by Death as their bass guitarist, but they soon had a falling out with the spectre of the afterlife. Since the band’s ? split, Bill & Ted have gone onto have suburban lives. They got married to princesses from another time and have daughters that are real chips off the old block. However, they’re still working on that legendary song that will one day unite the world, even shirking regular jobs away from music to make it happen.

Just when it seems as though they have to drop that dream, they’re forced to kick it into overdrive when the daughter of time-traveller Rufus arrives from the future. She informs them that they need to get that song done now as it’ll not only unite the world but save reality from collapsing. The reasoning for this song being needed to save humanity doesn’t make too much sense as a vague prophecy but does it matter? It makes about as much sense as the time travel logic where Bill & Ted decide to travel into the future where they’ve already written their uniting song. It’s twisty, mind-bending and rather headache inducing if trying too hard to connect the dots.

Thankfully, if one can just go along for the ride, the film works its magic for being a weirdly wild tale of music saving the universe. There’s a great parallel of the two storylines between Bill & Ted and their daughters B & T going on their own time travelling adventures. While Bill & Ted go further into the future to find answers for fixing their present (even visiting themselves on their deathbeds), their daughters head back in time to find influences for the perfect song. They swing by the 1960s to convince Jimmy Hendrix to play, but can only do so if they convince 1920s Louis Armstrong to join the band.

From that scripting, their certainly some retreading going on and I’d be lying if I said the film isn’t playing up to some of its own nostalgia. Consider the return of Death, still just as quirky and eccentric as ever, to the point of being absolutely adorable. He adds little more than a means of once more getting out of hell, which seems easier than ever now, but damned if he isn’t a lot of fun to see on the screen again, once more played by William Sadler with gusto.

Speaking of roles, it’s neat to see how Keanu Reeves and Alex Winter have grown into the characters with some history. Though they’re still laser-focused on their importance to save the world to be oblivious to matters of family, they don’t feel all that dumb either. They’ve become skilled enough in music that they’ve successfully passed down their accumulated knowledge down to their daughters, who are surprisingly astute while talking about music history and technique amid their party-on accents. It’s rather sweet and touching at times, especially when the girls seem even more aware of time-travel specifics than their dads.

Face the Music was directed by Dean Parisot of Galaxy Quest fame and he brings that same lovable energy of aged icons fearing they’re over the hill and finding a new adventure on the horizon. He manages to make Bill & Ted hilarious and enduring enough to root for without having to catch every reference or recognize every character. Though perhaps not the best part of this now-trilogy, it is one more fun romp with these characters in an adventure just confounding and cheerful enough to please. Not the most excellent, but excellent enough to warrant an air guitar of approval.