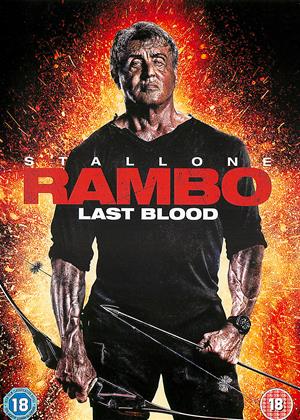 I can only assume the previous reviews for this film were tongue in cheek because this is really the worst kind of xenophobic revenge nonsense. You would have thought you could at least rely on the action scenes but the defending your home from villains was much better in Skyfall and even Home Alone (at least that was fun and had decent actors).

I've seen a couple of the Rambo films. This one was quite passable. It goes a long at a decent pace and doesn't need your whole attention. Is it likely to win awards, probably not. However, it does what it sets out to do. Watch once sort of movie.

One star is being kind to this appallingly bad film. Its an insult to First Blood. Stallone should be truly ashamed. Badly scripted, characters with no depth at all, xenophobic in the extreme, a plot that makes no sense other than to set up a very bloody finale, it feels like the film was written in reverse.

Somehow I knew it was going to be bad but thought it would be worth finding out... I was wrong.

Pointless finale and not a particularly good film on its own. - Rambo: Last Blood review by JD

Ive never been a fan of Sly. Imo his career has largely been made off the back of two of the greatest films ever made (FB and Rocky)

But i was impressed with the presence he brought to this film. Sadly thats all this film has. John Rambos presence. Everything else about it is terrible and worse still it comes across as utterly pointless.

First Blood was epic. One of those films that was never going to be bettered or replicated, least of all by silly sequels. It should of been left alone and this final film in the saga only goes to prove that.

2 stars, not worth watching unless you really are a die hard Stallone fan. Nothing in it for anyone else.

As good as ever - Rambo: Last Blood review by jb

Mess this this guy ??? over the last many months i have been watching most of Stallone,s old films+have enjoyed them all over again ,this new one is very violent also disturbing with its level of violence ,watch and be throughly entertained -its great .

What a mess and a horrible one. I'll give it one this, it can be pretty gory in parts. Seemed to think we'll take all the best deaths from the previous films and just make them nastier. Oh well, passed the time. Such a shame because the first film is so fantastic.

This film has nothing but bad reviews but I have always ignored the Critics and i Thought this was a great watch , Basically if you are a Rambo fan then please do watch , Is different from the others but I thoroughly enjoyed it.

What were you thinking Sly? - Rambo: Last Blood review by IW

It's Rambo, come on! I had never seen a Rambo film until the last one in 2008 which I thoroughly enjoyed. I didn't quite know what to expect from this one but it's stupid, the plot is an excuse for more violence and I really enjoyed it. Without giving anything away basically it's a revenge movie, and we all know how those end up. Stallone is his usual slow talking violent self and it's very inventive in showing new ways for people to die horribly so if that's your thing, fill yer boots!

This film reminded me of the Big Bang Theory where they espouse on the character of Indiana Jones not affecting the film.

Trying not to give spoilers, a lot of this film was caused by Mr. Rambo going in cack-handed and causing a lot of consequences. At no point does he realise this and feel guilt.

Admittedly the alternative wasn't ideal, but there is just no basic logic applied.

I wouldn't bother with this if I were you.

Despite a great opening, this film is vile in so many ways - Rambo: Last Blood review by TB

Whilst I have not seen the first three John Rambo films, I had seen Rambo many years ago, mainly because some of my friends who had seen it thought it was so stupidly violent that it almost became satirical. And when watching it myself, several times I did laugh, as it was like watching a computer game re-enactment with gallons of “tomato soup” style blood spraying about everywhere. One of the only positives about Rambo (the film) was the light that it shone on the horrific genocide that was happening in Burma/Myanmar.

I knew a little about Rambo as a character, in terms of his PTSD and flashbacks, as well as the severe trauma he dealt with which shone a light onto the very real issues faced by many members of the armed forces. But as well as this very real side, I was also aware that Rambo was a by-word for gratuitous violence, wooden acting and the “American” warrior stereotype. Unfortunately, this does not change in Rambo: Last Blood at all, instead introducing many much worse new things into the mix.

The most frustrating thing about Rambo: Last Blood is that, unlike a lot of people, I thought the opening 20 minutes was really good. The PTSD element of Rambo’s character was explored quite profoundly, and as has been pointed out by many people, when Stallone is given the right material, he is an extremely good actor. I totally bought into the difficulty and mental torture the character was going through and how despite his best efforts, these horrors stayed with him. The horse-riding scenes were also well-shot and there was a very good foundation set in the beginning. Unfortunately it then nose-dived.

I won’t talk in detail about the plot, but what started as a good film then just becomes the most bigoted, racist and xenophobic piece of work I’ve seen in years. Almost anyone who isn’t American/close with Rambo at the beginning of the film is shown as being evil and violent, one scene in particular set in a brothel is simply there to keep ratcheting up the message that these people (in this case Mexican characters) are human vermin who do horrible things to defenceless young women; and in the final showdown, which is basically an 18 rated version of the Home Alone traps and designed to be the pay-off, instead just leaves you in no doubt about just how rancid the messages in this film are.

The final thing to mention is that David Morrell, who wrote the original Rambo novel, after seeing this movie, totally disowned the Rambo film franchise, stating “I felt degraded and dehumanized after I left the theatre. Instead of being soulful, this new movie lacks one.”

Sylvester Stallone brought his character of Rocky to an enduring end with 2006’s Rocky Balboa, later passing the torch in Creed. Now he does the same for John Rambo, the tragic soldier who returned home to a war he didn’t want. Well, at least that was what First Blood implied. After that, Rambo basically became a joke of the tough action hero. But perhaps in Last Blood, we can find something more for a character who finally came home and tries to adjust. It is for this reason why this supposed last outing of Rambo is a let down of an action character spiraling further from what he once was and represented.

Stallone reprises Rambo after over a decade as less a hermit and more of a relaxing older guy residing on a ranch near the Mexican border. He still has flashes of his Vietnam days and his hobby of digging underground tunnels for blacksmithing doesn’t exactly make for the best of therapy. He befriends a Mexican family and seems to make warm connections well. The aged mother is a bit of shrew but he seems to connect well enough as one aged soul to another. The woman’s teenage daughter also takes a liking to him and he slowly learns to let her into more of his life. It’s when the teenager ventures into Mexico to find her father that she finds herself drawn into a darker world of crime. Thus, Rambo resumes his violence for justice.

The return of Rambo feels perhaps the most distant of previous iterations of the characters, having fully contorted him into not merely a rough-and-tumble, bruised-arm brother in arms but a sadistic killing machine switching gears into Taken mode. There’s certainly a more personal edge the way Rambo has taken the war home with him, fighting more against a crime syndicate than a terrorist group, but what more does the character have to add to his bloodthirsty nature. When questioned by his Mexican family at one point about people being able to change, Rambo insists he has not changed his ways and is merely trying to keep a lid on his vicious nature.

That may make the character sound like a more tragic figure, but here’s the problem with that. Rambo’s actions of giving in to his violent and vigilant mode is rationalized as being just what the doctor ordered when it comes to dispatching a cartel. He lures the gang to his tunnels for an exercise in brutality; shooting them in the face, slicing off limbs, setting them on fire, firing arrows, and, as a crescendo, removes the heart of his enemy, watching them slowly die as though he were in Mortal Kombat. I’d rumors a decade ago that one idea in consideration was pitting Rambo against The Predator. I can’t help but feel it would go down in a similar manner.

Last Blood offers no last thoughts on the character of John Rambo, merely showcasing how his strong and violent side can be inserted into any action formula, as seen here in a Taken-style scenario of a kidnapped girl and a retired killer killing once more. Though the action is supremely gory in a manner most fitting of a figure from the 1980s, so much is lost as the film meanders towards the characters end, blurring our vision as the blood sloshes on-screen and wipes away any concerns for the character’s mentality. Nevermind about how stressed Rambo feels about living in a much different society that he feels has betrayed him. All he needs is a little pathos and some evil gangsters to chop up and he’s apparently content enough to either fade away or lie dormant for another picture. Perhaps the Last Blood title can keep a lid on it this time.