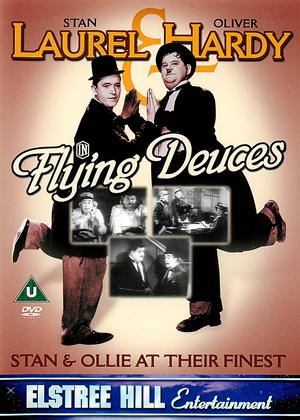 Rent other films like Laurel and Hardy: The Flying Deuces

Reviews (1) of Laurel and Hardy: The Flying Deuces

This is their first post Hal Roach film, at which point Stan and Ollie's films are reputed to go into decline. And while most of the jokes feel like we've seen them before (and it is in part a remake of their 1931 two reeler Beau Hunks) this is an interesting film because it is so mythic. It seems to be a film about representative figures who are fated to squabble and endure eternally for the sake of companionship.

They even touch on death and the possibility they will be together beyond their lives. There's a scene where they are literally tied to each other, planning to both die simultaneously, dismissing the possibility that one of them might go on alone.

Stan Laurel doesn't look well in this film, and has put on weight. As has Oliver Hardy. Which adds shading to their perennial comic struggles. It's a foreign legion film with Ollie going away (with his partner of course) to forget about a girl (the attractive Jean Parker). When he does, the duo decide they may as well go back to civilian life, only to discover it ain't that easy and they will be held to meet the firing squad at dawn.

At the end, Ollie dies, and actually comes back from the other side to be with Stan, though unfortunately as a horse! And the film is full of these moments, that can be dismissed as just a gag, but maybe, an attempt (intentional or not) to capture what is legendary about their alliance.