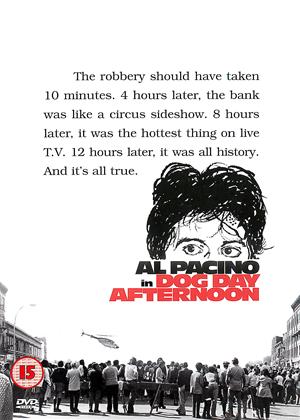 Excellent film – but a bizarre story! Apparently based on real events, the film tells the tale of a bungled bank robbery / hostage taking / media circus one hot summer's afternoon. Sonny (played by Al Pacino) and Sal (played by John Cazale) are first time bank robbers – but find the bank has no money. It then emerges that Sonny (although married with children) wanted the money to pay for his gay partner's sex change operation. And not only his partner, but his 'wife' via a marriage ceremony performed by a later unfrocked Catholic priest. Bizarre! Whatever the storyline, believable or not, it is well told and the direction by Sidney Lumet brings the story to life and the acting is uniformly excellent throughout. The screenplay won an Oscar and Pacino won a BAFTA for Best Actor – it's that good. 4/5 stars - highly recommended.

This is a gem worth finding. I had never heard of this film before but I wish someone had recommended it before. I had never seen such dark humour until recently (7 psychopaths etc). It very nearly becomes slapstick early on but Al Pacino, who is always good, is totally f*****g stella. He transforms it into comedy of such deep dimensions I was amazed there was anything like this in 1975. This is the saddest most agonising, laugh out loud film you will ever see.

A wonderful watch with the ever excellent Al Pacino taking the lead as bank robber 'Sonny' Wortzik in this non fiction presentation.

I checked out the real life story after seeing the movie and found the scenario/characters even more bizarre than the movie. Although over 40 years old, the movie still looks fresh today. Thoroughly recommend.

This is one of those films that should be on everyone's list of must-see titles.

There is so much that is well done in this film, from the photography, the lighting, the storyline (based on real events), the acting (not just from the young Al Pacino but everyone), the portrayal of gay relationships (without lapsing into stereotypes), and if you see the extra documentaries on the disc there is some inspired improvisation as well.

It's an exciting and tense stand-off when a bank robbery goes wrong, and it deals with all the logical turns of events that develop after that. It hasn't aged after all these years, watch it.