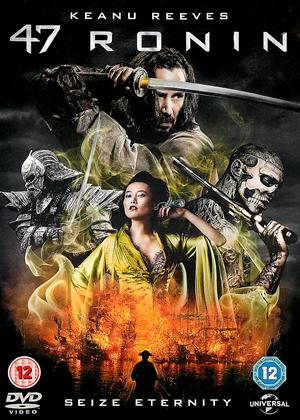 I thought this looked quite interesting from the trailer and the mix or real events, shoguns and the supernatural looked promising. However, the whole things looks so fake and this goes as far as Keanu Reeves' performance. It would be nice to see the traditional story without the need to include a Hollywood star who looks out of place amongst Japanese acting royalty. None of the relationships ring true and the effects, though many, fail to impress.

This is by far the worst Keanu Reeves film I have ever seen. It makes he's performance in Bram Stoker's Dracula worthy of an Oscar. What on earth was he thinking when he signed up to make this pile of s***t? He would of done he's career more favours by starring in Speed 2. There are not many films I don't finish watching till the end but this one, I'm sorry but it ruined about 47 minutes of my time and then I gave up on it completely. Truly, truly awful, just dire. If this had been a Japanese subtitled film with foreign unknown actors then perhaps it would of done it more favours. Having Keane in it just f****d it up big time. Rant over....

A wonderful, simple, beautiful and poetic film in the true tradition of the Japanese Samurai movie.

It is obvious that a lot of passion and courage has been put into this film by everyone involved. Lots of action but not your typical Hollywood rubbish. Great cinematography, special effects, acting, story etc! And it is based on a true, albeit highly mythologised story!

I simply cannot understand why some people have given it such bad reviews?!

Of course everything is in the eye of the beholder! It is not just about the film but also the receiver!

When it was announced that Keanu Reeves big comeback film would be the supernatural epic 47 Ronin I wasn’t surprised. Reeves has been heavily influenced by The Matrix and while Ronin is decidedly different it stretches the fabric of reality to tell a different kind of story,a strangely human one in a world filled with giant snake monsters.

The film follows the story of Kai (Keanu Reeves), a young boy who fled his land and was taken in by a respected samurai. However when he grew up he was seen differently, like an outcast and because of this he sought to prove himself worthy. When his savior is killed however he must get revenge with the help of the 47 samurai that were left masterless, making them just as lowly as him, the titular 47 Ronin.

While the story is the usual story of epic loves pushing people to do almost anything to protect those they care about it doesn’t feel ordinary. The tale is complicated and strangely realistic as it mixes the very real ideals of Japan with the supernatural elements that exist within Japanese history. The result is a ever so cheesy picture that isn’t afraid to push the limits with the films ending perfectly capturing the tragic lifestyle of the samurai.

With a great supporting turn by Hiroyuki Sanada as Oishi the leader of the 47 the film really kicks into high gear when the story begins to follow Kai and Oishi together as they help each other understand their own status with Kai helping Oishi understand his place as a Ronin and Kai learning what it really takes to be a samurai. The two share some great scenes together making the second act the best in the film.

While the film does lose itself in a mesh of supernatural nonsense and lovey dovey silliness towards the end it culminates in a final scene worth waiting for, a moment of catharsis and tragedy all in one that brings together 47 Ronin’s mismatched plot into something meaningful and even a little unexpected.