Rent The Hobbit: The Desolation of Smaug (2013) 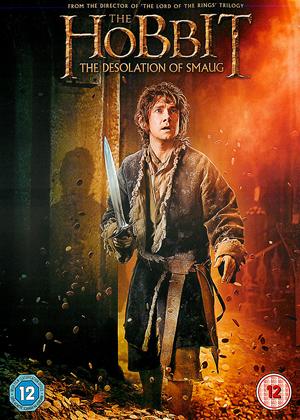 Rent other films like The Hobbit: The Desolation of Smaug

Reviews (2) of The Hobbit: The Desolation of Smaug

'An Unexpected Journey' - The Hobbit: The Desolation of Smaug review by Milstead On Movies

What was Peter Jackson thinking when he subjected us to the first film, which was practically two & a half hours of character building and the odd tribute to The Lord Of The Rings. The only scene of note was when Bilbo Baggins discovers Gollum & the 'ring', which we already knew by watching the LOTR trilogy.

In honesty, you could skip the first movie and be justly rewarded. You'd miss out on a bit of back story but you could easily pick it up and enjoy some brilliant scenes of action and adventure.

Bilbo, Gandalf & the dwarves are continuing their quest across Middle Earth from the first film and face peril at every step, across an enchanted forest, a kingdom of surly wood elves (including Legolas - Orlando Bloom), a floating village, before they eventually penetrate the dragon's (Smaug) lair.

As in the previous film and The Lord Of The Rings trilogy, meticulous effort and sweeping photography transports you to the mythical Middle Earth convincingly and the visual effects, makeup, costumes and production design are as good as they can get, although it's a shame that CGI has replaced makeup when bringing some orcs to the screen. The CGI animation to bring Smaug to life however, is top notch and Benedict Cumberbatch was a very good casting decision for the dragon's powerful, creepy voice.

The ending sets up the third film nicely, although it's a shame about the crap Ed Sheeran song ('I See Fire') which plays over the end credits.

A Smörgåsbord of Special Effects - The Hobbit: The Desolation of Smaug review by KG

Amazing animation and special effects, good adaptation from the book, looking forward to the third installment.

The Hobbit: The Desolation of Smaug review by Alyse Garner - Cinema Paradiso

The second movie in Peter Jackson’s adaptation of Tolkien’s novel the Hobbit reads in many ways much like it’s predecessor; visually the effects, landscape, costumes and sets are superb – whilst much like many middle films the narrative trundles along at a somewhat slower pace. The show is still stolen by an excellent performance from Martin Freeman as the hairy footed hobbit himself: Bilbo Baggins.

The film picks up where the prequel left off, with the hobbit acting as a burglar amongst a company of dwarves on their way to reclaim their homeland from a viscous and gold obsessed dragon. Much like in An Unexpected Journey the group of travellers find themselves hunted by orks and dogged by wargs; whilst a brief respite in the home of a skin changer and attempting to pass through the kingdom of the woodland elves both make for tense but exciting breaks in their long journey. The key aspects of the film however, in my mind at least, are the moments in Lake Town, where a boatman named Bard (Tamara Drew’s Luke Evans) aids the dwarves in their clandestine crossing into the town from the realm of the wood elves; only to throw them into the middle of a long lasting feud between Bard and the Master of Lake Town (a terrible failure of mis-casting in that of the effervescent Stephen Fry who is reduced to little more than a caricature in such a limited role). Lying in the shadow of the mountains under which Smaug lurks the town is torn regarding the dwarves quest, with many fearing that waking the dragon will only mark the destruction of Lake Town.

Beyond this there is a rather unpleasant bit with some very large spiders which I would not recommend to those a little wary of either arachnids or the dark – and the addition of a new female elf, Tauriel (Evangeline Lilly of Lost infamy) a love interest to Orlando Bloom’s Legolas the film felt more like a time killer than a genuine adventure; the moments in between those of high action or narrative importance meander somewhat uneventfully, whilst the final denouement in which Bilbo confronts the dragon himself is a little bit too cartoonish and child-friendly for my liking.

Ultimately I expect the Desolation of Smaug to remain the weakest film in the Hobbit trilogy, and eagerly await a lift in suspense and entertainment when the final film, There and Back Again, the narrative of which is based largely on the auxiliary notes of Tolkien regarding the history behind the Necromancer, Sauron and the inevitable build up to Frodo’s adventures in the Lord of the Rings movies.