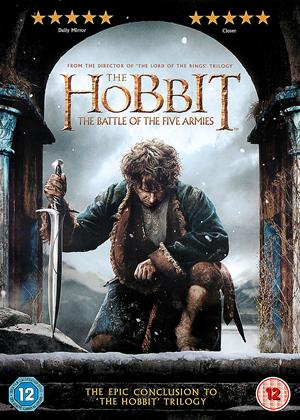 Rent other films like The Hobbit: The Battle of the Five Armies

Reviews (2) of The Hobbit: The Battle of the Five Armies

Excellent film - The Hobbit: The Battle of the Five Armies review by ps

We really enjoyed this film great action all through the special effects where brilliant I always enjoy Peter Jacksons work I would certainly suggest anyone watching this film!

Elves and dwarfs and computers. - The Hobbit: The Battle of the Five Armies review by NC

If like the first film, while doubtless like the rest. All good dosh for the actors and computer men for sure. Get a bit deja vu with all the noise and computer graphics type films now. X men and transformers and die hard and mission imposs etc etc. Simple and well acted films quite a reief......Imitation game is good example............

The Hobbit: The Battle of the Five Armies review by Mark McPherson - Cinema Paradiso

Peter Jackson’s finale to the longest adaptation of the shortest Tolkien book has the most battles, the most special effects and the least amount of story. What was once one chapter in a light read has ballooned itself into 144 minutes of never-ending carnage. Arrows fly, swords clang, winged beasts descend from the skies and clubs smash against Earth and stone. Remember that story we were following in the first two Hobbit movies with Bilbo going on an adventure? Well, this time Bilbo (Martin Freeman) mostly sits this one out as hordes of warriors go at it for about two hours. Forget adventure, this one is all action to the point where you feel just as bloated on the fights as the film itself.

The film does have a strong opening with the dragon Smaug (voiced by Benedict Cumberbatch) laying waste to a town. He breathes fire, smashes buildings and mocks the hopeless mortals that either flee or attempt to stop him. Smaug makes for the perfect cackling villain and his rampage is quite a sight. While his sequence is amazing, Smaug’s destruction is cut short by his defeat before the main title even appears on screen. So what does the film have left after that? A big battle for the mountain. An elf army comes to fight the band of dwarfs behind the mountain walls. Then a dwarf army shows up from the right. Then an orc army shows up from behind. Then some creatures of the forest descend from above. Even giant worms smash their way out of the ground.

What follows is fighting; lots and lots and lots of fighting. These scenes can best be described in the big battle cliches of just about any action picture. A kind guardian hears some children shrieking in the distance about to be clobbered by a giant. He hops a ride and crashes directly into the beast before any damage can be done to the victims in distress. A lone elf warrior is surrounded by orcs and fights them in the circle of death as valiantly as he can before they close in. Occasionally an orc will hold up some character we knew just long enough to feel a little something for when he runs them through. Then a transforming bear bats some soldiers around, dwarfs lunge at the enemy and a giant moose impales a collection of bad guys. It’s amusing to think of Bilbo actually describing this part of the story to Frodo like a kid playing with his action figures.

There are still a few moments of real directorial effort that doesn’t involve legions of CGI creations. Thorin succumbs to some sort of dragon-sickness that results in a beautifully surreal nightmare of him drowning in a sea of gold. The bard who ends up saving a town displays some true humanity as he leads his people to be both defensive yet forgiving. The moment of departure for Bilbo from the group, after everything he has been through, has a pleasingly warm feel to a journey’s end. These few scenes remind you that there is still some heart left in these Hobbit movies even in the final chapter.

What the film should have been was a grand send-off what with The Battle of the Five Armies being more a reunion for these actors. Everybody pops up for the fight including Orlando Bloom, Christopher Lee, Cate Blanchett and Hugo Weaving. And they all get a chance to pick up a sword, a staff or a bow to get in on the action. But that’s about all most of them get to do. A few of the cameos are even reduced to minor shots of the big battle. Where did all that heart and spirit of adventure go that was present in the previous films? The film spends so much time away from the true soul of The Hobbit that the touching end to this saga feels almost out of place for a movie such as this.

In a move to keep these Hobbit movies of a certain girth, Peter Jackson seems to have taken a cue from Michael Bay for The Battle of the Five Armies. If you don’t have enough story to fill two hours, fatten that script up with some massive battles and plenty of computer graphics. And keep fattening it up until you’ve reached that target running time. It’s been known since the beginning of this trilogy that it would be elongated, but this is the one film where the padding out becomes painfully obvious and disappointing. Jackson’s films are usually followed up by extended versions. I’d be willing to watch a version where he actually shortened and edited all three of his Hobbit movies into one film. If there ever were such a thing, the third installment would be trimmed the most from that cut.