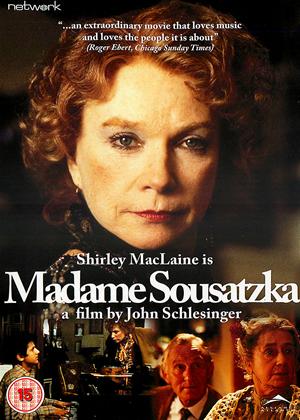 The boarding house appears in many a film. Although the tall London house in Madame Sousatzka (1982) has in fact been divided into flats, it amounts to a boarding house, for the residents are in and out of each others' places much of the time. And what a household it is. At the centre - literally and figuratively - is the eponymous piano teacher (played by Shirley Maclaine); in the mouldering basement is Peggy Ashcroft as Lady Emily, down on her luck - there is even a cardboard box labelled Distressed Gentlefolk); Geoffrey Bayldon, who plies a perilous trade as a masseur, has also known better times while, in a room at the top, Twiggy lives in hopes of them while a music agent played by Leigh Lawson avails himself of her.

Richly decorated - a lifetime's souvenirs squeezed into such rooms -, events move at a pace as Shirley Maclaine takes on a promising teenage Indian pupil (Navin Chowdry) whose young single mother (an inspired Shabana Azmi) prepares catering food from their flat in a suburban house. Directed by John Schlesinger from a script by Ruth Prawer Jhabvala (who adapted Bernice Rubens's novel), it all moves at a pace even when lingering upon the lessons which are as much a performance for the reminiscent teacher as her pupil at the keyboard. Hers is a tragic history, a matter of loss, which includes pupils who do not want to bide their time but succumb to other blandishments - as looks set to be the case when Twiggy's agent chances to scent greater rewards in the pianist than anything offered by her flop single.

Here is terrific ensemble playing, down to the small parts taken by a dodgy developer who prevails upon a local official to deem the place uninhabitable. The marauding early Eighties are caught so well, the place festooned with estate-agent boards (the names are invented, as is the firm Bream painted upon the side of the obligatory skip).

In fact Bernice Rubens's novel was published twenty years earlier (and drew upon some of her own life as part of a musical family and letting out rooms herself in her London house). High time to catch up with her work.