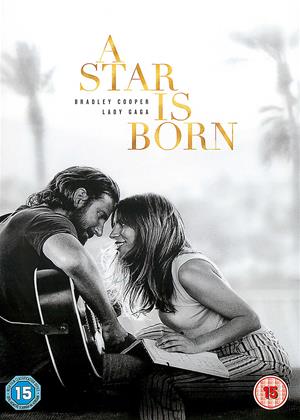 Came into this with reasonably low expectations but come the end I was blown away.

I loved most of the music (bar a couple of poppy numbers) and Cooper and Gaga had unbelievable chemistry together. The first moment they sing 'Shallow' together was incredibly powerful and this song is the signature track and has an important part to play in their lives.

Definitely a melodrama but a finely-executed one at that. Really surprised by how much this film got to me, thought it would be a knockabout fun yet diverting couple of hours but it was far more than this.

A real diamond - A Star Is Born review by BE

I can only iterate review by MG. I was not expecting much but was totally blown away by this incredible movie. Bradley Cooper and Lady Gaga are without doubt, major talents. Not only did they act in it but they both wrote and performed most of the songs. Mr Cooper also directed and co-wrote the screenplay. Wonderful chemistry between the two leads and superb camerawork. A beautiful, seamless movie and not a minute too long. Apart from one song, how could they have ignored this masterpiece at the 2019 Oscars?!!! Shame on them ??

What struck me most of all when watching this film was the constant use of strong swear words. So immediately I was alienated. Lady Gaga was attractive but the main lead looked old and washed out. The story failed to keep me interested but some of the music was quite pleasant. Not my type of film.

Going GAGA - A Star Is Born review by JD

Not the best version of A Star Is Born by any means, but Lady Gaga is superb. Bradley Cooper never convinces as a “ singing star” and his DIrection is ponderous at best.

The musical numbers are well done and “ Shallow” is worth the Oscar it won.

The trouble is the story is not very interesting or original.

Having seen the Barbra Streisand & Kris Kristofferson version I much preferred that film compared to this one. Lady GaGa has a great voice but I did not think she was any better than Barbra and Bradley Cooper was too washed out and lacked the strength of character as portrayed in a different version of the film. It was for me an OK film but showed weakness in some parts. Would I watch it again, I don't think so but make your own mind up.

Absolutely Dreadful - A Star Is Born review by giantrolo

We stuck with this to the bitter end, but wished we hadn't. Although the acting wasn't bad, it was an absolutely appalling storyline. The only tender moment was the one in the car park. Save two dull hours of your life, and add a different film to your list.

what a stuggle! - A Star Is Born review by LJ

Superb film - A Star Is Born review by VE

Great music and visuals make this a superb film. Lady Gaga deserved an Oscar for this one. The acting and music are first class.

The fourth version of a story first filmed in 1937. Very dull though, more of a women's film maybe? - A Star Is Born review by PV

First of all I would say I am no fan of Lady Gaga - she's derivative in the extreme, all style and no substance. Just gimmick. Yes, she can sing, but so can loads of other girls. No idea why gay men want to worship her.

Secondly, I know of this story filmed first in the 1930s, then the 1950s with James Mason then 1970s with Barbra Streisand and Chris Christofferson and I don't think I have seen any of them though suspect I'd probably prefer the 1970s version.

I just found this all so predictable and boring. Maybe more of a women's movie? It's basically a fairy tale.

I did like the main song and it deservedly won an Oscar.

Top Marks - A Star Is Born review by GG

I loved it, Bradley Cooper has gone up in my estimation, I didn’t expect it, but he was very good. Lady Gaga was excellent also, but I half expected her to be. A top film I would heartily recommend, keep the hankie handy. I was glad I watched it on my own!

A Star Is Born review by Mark McPherson - Cinema Paradiso

As I sat in the theater awaiting another version of A Star is Born, there was a fear in the air. I could hear murmurs of the same topic floating around the audience; can Lady Gaga act? Sure, it was on my mind as well, almost as heavily as to whether Bradley Cooper could become the triple threat of the picture by directing, co-writing, and acting in a role that requires both emotion and singing talent. Relax, folks; by the time Cooper strolls up to the mic and Gaga bursts onto the scene, you can rest easy knowing they have the chops to dominate the screen and the microphone.

Cooper plays Jackson, a washed-up singer-songwriter that is just starting to tumble down the slope. With his hearing going and his drug problems worsening, he retreats to the bottle as his brother/manager (Sam Elliot) watches on both angry and sorrowful. But then a gleaming light comes into his life when he stumbles into a drag bar for a drink. Upon the stage, the most unlikely of discoveries is Ally (Lady Gaga). By day, she works in a kitchen and tends to her home where her dad (Andrew Dice Clay) is running his own business with his buddies. By night, her voice comes out in the most dazzling performance of “La Vie en Rose” I’ve ever seen. Jackson wants her on the stage and his life, despite how she feels about not being pretty enough to be a star.

After much pushing by Jackson and a fearful leap by Ally, their singing careers and romance takes off. As Ally rises up in the charts and on magazine covers, Jackson slips further down the road to mediocrity as he drunkenly stumbles down a darker path. And yet they remain together, despite their feuds, Jackson’s problems that require much attention, and Ally’s manager that insists she drops him as he is a dead weight on her career. But they stick close, through the toughest of time, and Cooper and Gaga have the beautiful chemistry that we want to see them fight to keep the romance alive.

There’s so much to adore about this picture. The music is unforgettable, every song carrying a little extra meaning so that the centerpiece song of “Shallow” never sounds the same twice. The film is beautifully shot, small clues always in the background that either reveal the past or future for these characters. Watch how in one shot we see the pain of Ally having lost her mother without directly stating it, the wedding photo visible in the background. A foreboding billboard is seen just outside Jackson’s car as he heads into a bar for a drink. The supporting actors are all just as strong, from the emotionally-bitter Sam Elliot to the casually philosophical Dave Chappelle. Cooper’s direction also keeps the film relatively fat-free, breezily skimming over the lesser moments of the media circus and slowing down to linger on the more intimate and tender moments of Jackson and Ally.

A Star is Born is the type of film I’d want to watch many times over to catch anything I may have missed in the expertly-shot scenes and drink in some more of that powerful music. This is one of the best films of 2018, if not for its production overall, then for the acting and music at the absolute least.