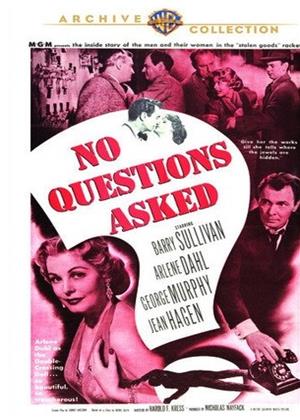 Not released
I Can Get It for You Wholesale

Not released
I Love Lucy: The Very Best Of

Not released
Bells Are Ringing

Not released
It's Always Fair Weather

Not released
The Caddy

Not released
Rich, Young and Pretty

Reviews (1) of No Questions Asked

A GLOSS ADJUSTER - No Questions Asked review by CH

"No, I think he looks pretty cute as he is."

With a fast-paced nighttime opening somewhere in Manhattan, and some snappy dialogue, No Questions Asked (1951) is certainly not in the ruck of noir offerings. Written by Sidney Sheldon and directed by Harold Kress (perhaps better known as an editor), its events spring from an insurance agent (Barry Sullivan) being dumped by his fiancée (a splendidly self-seeking Arlene Dahl). To increase his financial standing, he becomes a middleman between the mob and insurance companies who are willing to pay less for the return of goods - no questions asked - than they would in payouts to aggrieved clients.

Such a set-up, did any of them but realise, can only have a limited life, and the death throes kick in swiftly enough during these eighty minutes, the killer being an audacious raid the likes of which has never been seen before or since. Say no more other than that there is no opening night on Broadway to match it.

To the usual bars, smart drawing tooms and down-at-heels offices is added a swimming pool with a malevolent aspect all its own.

The film offers a final moral. It was made by MGM, which had the funds for glossy production. Although it does not go overboard here, a squeeze on the budget could have made it that much punchier.