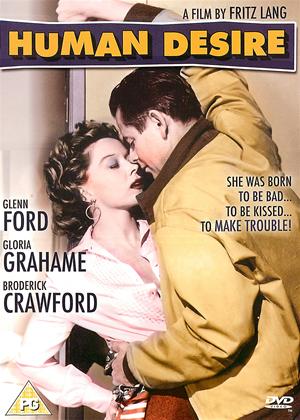 A solid film noir thriller, though the resolution feels very rushed and not particularly satisfying.

While the rules of fifties film noir had shifted from the forties prototypes, Human Desire returned closely to the characteristics of the earlier classics. It has a femme fatale in Gloria Grahame, and a male dupe back from the war played by Glenn Ford. Only now it's Korea rather than WWII. The stars were rematched after their success in The Big Heat the previous year.

Grahame as Vicki Buckley is a traditional enough archetype, a provocative, sexually distorted looker motivated by greed. She enlists train driver Jeff Warren to murder her violent, abusive husband, a railyard worker played by Broderick Crawford. Yet for most of the film she seems a victim as she is physically and mentally tormented by her jealous partner and was sexually assaulted when sixteen by her guardian. Only in the last scene do we discover much of the web she spun to entrap Jeff had been lies.

No one played hot sleazy trouble like Gloria Grahame and if this isn't the classic that The Big Heat was, she and Ford are still incandescent together. Vicky is damaged by exploitative men, but our sympathy is shaken finally when we see the moral vacuum that she has learned to hide. She's quite a horrifying figure, and if ultimately unredeemable, we see that as a woman at that time, her choices are limited.

The noir plot is interesting, the railway setting very atmospheric. The constant rhythmic clang of the engines evoke a heart beating. The tracks are used for symbolic effect in a variety of ways. It has a great restless expressionist look, with the lights of passing trains fleetingly illuminating the frame. It's a more sexually frank film than most American films of its time, in keeping with its source, the French melodrama, La Bête Humaine. This was Lang's second remake of a Jean Renoir film after Scarlet Street.