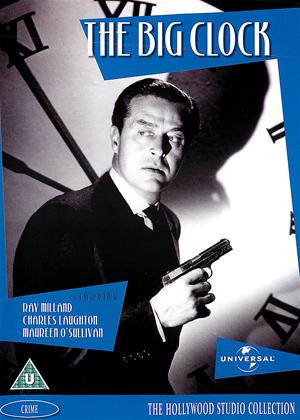 Reviews (3) of The Big Clock

A Stinger - with Stingers - The Big Clock review by CH

There is something to be written about a husky voice in the movies. Naturally, it sums up many a dame in a bar, but there is also Marlon Brando's struggle with his tonsils in The Godfather. Some, though, might make the case for Charles Laughton who plays a tyrannical magazine publisher in The Big Clock (1948) where every dip in the circulation brings explosions to those troubled lips as they order firings.

He has an obsession with time and money, so much so that the smart lobby of the Manhattan building features a near-atomic clock which links to many places around the world - and fuels those clocks within all the offices - while his ravaged-voice soliloquy during a meeting lists the exact number of seconds, each one a heartbeat, in the average human lifespan.

This is strange, driven territory, buttressed by daily life in a skyscraper. One of the staff, a crime expert, is Ray Milland, whose wife (Maureen O'Sullivan) is more than miffed that, after seven years' marriage, they have still not had a honeymoon, such is his misplaced devotion to work. Their delayed honeymoon/vacation is due to start the very evening of the film (with a young son along for the ride).

Things do not turn out that way, for a glance at the clock tells Milland that he has missed the train on which they were due to meet. Clocks, and other timepieces, recur in the film, as they do in the well-nigh real time of The Set-Up. Symbolism does not obtrude, though, while the pace increases to great effect. It was directed by John Farrow, from a script by Jonathan Latimer, himself a fine thriller writer, who worked from a novel by Kenneth Fearing (a great name for a noir writer, and one must seek out the poems by which he set greater store).

And, of course, there is a dame. Rita Johnson. Not perhaps a name known to many. She plays a mistress to Laughton, and Milland becomes smitten with her when, in a bar, she hints at all the torrid behaviour she has endured at the hands of that corrupt figure. They have a wild night, after that missed train, and encounter, along the way, a glorious Elsa Lanchester in an after-hours antique shop.

To mention these few scenes is but to hint at so much going on in this film. It has a huge cast of extras, such as those who fill the elevators and those who operate its buttons while fending off flirtations from those with palpably bursting buttons.

To say any more about the plot, which combines claustrophobia with depth of field shots which rival those in the similarly tyrannical Citizen Kane, would spoil it. Worth saying, though, that the film lifts off with the arrival of Rita Johnson, who, it seems, may have had some real-life experience of dodgy men leaving her bruised. And, in a turn to events the very stuff of noir itself, she suffered a brain injury when one of those now-vanished, head-encasing hair-dryers collapsed upon her, and she could not work again: a situation which brought on the alcoholism which duly killed her.

She was terrific. She is not in The Big Clock for long - but she makes it all her own, especially in the bar scene when the waiter almost chokes at what he is asked to add to a stinger. As for Ray Milland, one must wonder whether he will fulfil that promise to his wife that, after all this, he will return to small-town journalism to “report church fairs, write obituaries, and set type.”

Taut film noir - The Big Clock review by NO

Slow start with confusing slick dialogue but gets better when the mistress comes on the scene.Very effective high contrast photography as the pace increases with the megalomaniac tyrant Laughton at his best.Enjoyable.

A Taut Thriller - The Big Clock review by Cato

Ray Milland (the Welsh American) gives a very good performance in this taut thriller in which he's caught up in the murder of a young woman by his newspaper editor, played by the very nasty Charles Laughton. Great filming in this 1948 film, showing how New York had considerably advanced after the war.