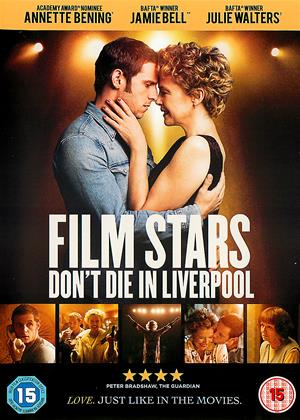 Rent other films like Film Stars Don't Die in Liverpool

Superb - Film Stars Don't Die in Liverpool review by BE

Jamie Bell and Annette Bening give Oscar worthy performances in this wow of a film. May not be everybody's cup of tea but you'd be hard pressed to deny the brilliant performances. It was also a good representation of life and fashion in the 70/80s and I didn't spot any continuity errors! It was so much better than My Week With Marilyn which came across as artificial. The movie stayed with me long after I left the cinema.

If I didn't know the film hadn't been based on Peter Turner's memoir, I would not have believed in the love story depicted in the film. Although it's 1987, Gloria behaves like the characters in her black and white films - all boopidoo, pouting and winking and using a little girl voice to create her allure; which may have been acceptable back in the forties, but by 1987 was nauseating . Confusingly, the soundtrack, the clothing and interiors in the film are from the past, ranging from the London boarding house (1900s), the Liverpool house (1930s) Gloria's places in New York and LA (1950s and 60s). Almost nothing in the film gives the flavour and energy of the 80s. There are tantalising mentions of Gloria having seduced her step son when he was a minor before making him husband No.4, and confessions that both had had same sex relationships in the past, but neither is explored in the film. Jamie Bell is excellent, but a cameo with Vanessa Redgrave and Frances Barber steals the show!

I remember it well. - Film Stars Don't Die in Liverpool review by JR

I was 20 in 1981. What rankled with me was Peter's stubble and short hair. Great pains were taken to make everything else period to 1979 -1981 but men at the time were clean shaven and had much longer hair, down to collar length or more. Peter's 2018 fashioble stubble prevented me from fully engaging in his character. Otherwise enjoyed the film. Quite moving, wanting me to learn more about Gloria's short life.

What a gorgeous film about the sexual chemistry between a younger guy and an older woman.

The chemistry between the two lead actors was palpable..their chemistry made the film for me.

Not a lot of plot but this was overcome by the fabulous acting of Annette Benning and Jamie Bell...they were fantastic in this film and absolutely achieved the essence of the troubled relationship by portraying the characters genuine love for each other with such conviction and passion.

Films Stars Never Die When There's Films Made Like This... - Film Stars Don't Die in Liverpool review by DS

Film Stars Don’t Die in Liverpool is beautiful romantic drama about a part of real-life actor Peter Turner’s life in the late 70s early 80s. He met and had a romantic relationship with Gloria Graham, one-time Oscar winner and 50s silver screen star. The film centres on this tempestuous relationship that had its ups and downs, but the film makes clear was a true love between the two.

Jamie Bell plays Peter, already a fish-out-of-water actor within his own working-class household and neighbourhood who further pushes against the ‘norms’ when he starts a romance with the much older Gloria. Mr. Bell is on top of his game here, he rarely isn’t to be fair, and breathes believability into a working-class Liverpool lad who happens to love acting and really loves this older woman without actually realising exactly who she was. His relationship with his family, bewigged Stephen Graham and Julie Waters could be said perhaps to be conflicting, dramatastic, actor fodder but in all honesty it’s easy to believe that with Peter being an actor and all the problems and uncertainty that could bring and then being in relationship with a famous, albeit fading, eccentric movie star might bring a few errr conflicts. Still will all know actors love shouting and angry arguments.

The cast is uniformly fantastic with Annette Bening playing the older, insecure, Gloria Graham who ultimately proves to have a deep and caring love for Peter although he never finds out how much, but the audience is let in on it.

There is some great film-making creativity going on here and with trips back into the past a mere step through a door and some old-style backscreens during driving scenes which I think added to the charm of the story. The chemistry between the two leads is there to be seen and none more so than their first meeting a fantastically choregraphed and naturalistic dancing scene – and who doesn’t want to see Billy Elliott giving it some seventies disco?

There are many stand out moments in the film just two come straight to mind; the visit to the cinema and then the pan up to what film it is (not spoiling that) and Peter, his dad and the dog visiting the pub and a completely natural conversation between them that takes place.

All in all, this film is great piece of cinematic romantic drama that is acted impeccably by its superb cast made even more amazing by the fact it is based on a true story, a true romance if you will.

Film Stars Don’t Die in Liverpool is a simple love story about a younger man and an older woman – at last, because I’m fed up with wrinkly old men copping off with twenty-something starlets. That the star-crossed lovers are actors and one of them a fading famous one is really incidental. If they had been a plumber and a shop owner, written as it was and acted as it was, it would have been as good.

This a story about love and how any true love no matter how short and sorrow-filled is better than no love. Without doubt this is a film that loves love but there is some love left over for the magic of film and the days when Gloria Graham was a star.

Great acting, great film, great story and you will get ‘something in your eye’.

A small film in the nicest possible way, this warm romance - based on truth - boasts several stand-out performances (notably Bening and Bell) along with a deft directorial touch.

It doesn't turn the world upside down but it isn't trying to.

An enjoyable, romantic, night-in sort of a film.

I had heard of Gloria Grahame, but did not really know much about her, or her films. This was an insight to her last days and also a very moving love story. Would like to have known more about what happened to her lover, Peter after her death. A few lines before the end credits would have been nice. Worthwhile having a look at.

Miss Bennings portrayal of the fabulous Gloria Graham is faultless

Jaime Bell as her toyboy is excellent

This was a very disappointing film. It was impossible to be interested in the relationship between a narcissist and a boring younger man, Even the usually excellent Annette Bening struggled to make the pedestrian script come to life. Nothing explained or portrayed the passion between the two. As others have pointed out the film makers had no idea about the period the film was set in and all the sets were from an earlier period. Overall it is a complete disaster.

An interesting film covering the relationship between Gloria Grahame and a provincial UK actor Peter Turner primarily in Liverpool with Grahame lodging with Turner's parents in Liverpool, superbly played by Julie Walters and Kenneth Cranham, and a host of A list cameos led by Vanessa Redgrave. Whilst watchable it did not grab the heart strings and try as hard as they could the leads were not able to hold my utmost attention during the viewing. As a period piece though it was thought provoking!

It was a great little film. Very nice to see Jamie Bell in a good role and Annette Bening was as good as ever. Interesting too - never knew about the story.