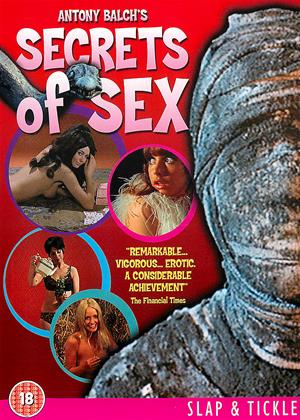 Sign up
Can You Keep It Up for a Week?

Reviews (1) of Secrets of Sex

Antony Balch is regarded by some as one of the great what-ifs of cinema. What if he'd actually succeeded in filming "The Naked Lunch" 20 years before David Cronenberg, starring Mick Jagger? Would it have been a work of fevered underground genius, and would the other films he made before his tragically early death have scaled even greater heights? We'll never know, but judging by the only two feature films he managed to complete, "Horror Hospital" and this one, the answer is no. By the way, in case anybody somehow thinks a movie called "Secrets of Sex" is a "classic" because this website categorizes it as one, I should point out that some of their categorizations are very peculiar indeed!

This, Balch's first (and second-last) theatrical feature, is plotless early seventies soft porn trying desperately to be something else, and not quite managing; I assume he had a contract to make an "adult" movie, and attempted to put as many interesting ideas in there as he possibly could while keeping the nudity quotient high enough to satisfy his paymasters. Narrated, for no discernible reason, by a mummy (Valentine Dyall, the only name in the credits you might possibly have seen elsewhere), it's a series of short stories unconnected except by the extremely loose theme of "the battle of the sexes". Some of them are feebly horrific, some are clumsily comic, some are downright baffling, and all are "acted" by people who don't normally appear in the kind of films where acting is considered a relevant skill.

Balch is clearly taking a satirical poke at the soft-core genre even as he contributes to it. A screamingly gay man directing a movie intended to run in the kind of cinemas frequented almost exclusively by heterosexual males, he seems to have gone out of his way to alternate nude women with nude men, sometimes accompanied by the explicit suggestion that the audience might fancy both of them, in such a way as to create guilty confusion amongst virtually everyone likely to have seen this film in a cinema. Naked dancing girls are pelted with rotting vegetables. One episode revolves around what is obviously the most sexually un-arousing concept Balch could possibly think of for persons of any sexual orientation. And the nudity (of which there's a great deal) is sometimes dropped into the film like a Dadaist found object while other characters spout barely relevant gibberish almost worthy of Ed Wood.

It's an absolutely dreadful film which goes out of its way to deliberately alienate its supposed target audience in the hope of getting a reputation as an arthouse movie. Since this particular DVD was pressed by a company called "Slap & Tickle", I think we can safely say it didn't. While watching it, I tried to imagine what kind of person would find this movie, taken as a whole, erotic, and I honestly couldn't. But you know what? I have to admit that it's not quite like any other film I've ever seen. It's not good, but it's not offensively bad; it's just plain weird, and I'd recommend it on that basis. But no other.