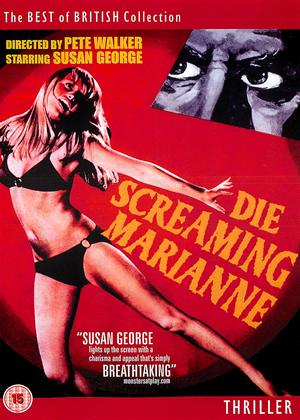 Director Pete Walker is notorious for his low-budget horror films throughout the 1970’s. This, his first, is a horror in title alone, and a couple of mildly grisly moments. The film aims to be some kind of slow-burning psychological thriller concerning Marianne’s crooked relatives attempting to kill her so to claim her vast inheritance, but contains too few surprises and a pace far too slow to sustain that.

Susan George plays the titular character and is terrific throughout, her initially headstrong behaviour played as naïve and confused rather than as reckless as she first appears (also, for an exploitation picture, she wears her various skimpy costumes extremely well). Barry Evans is the good guy, Eli. Evans seems too fey for the role (Patrick Mower and Ian McShane were also considered), but his niceness is reassuring against the shenanigans of ratty Sebastian (Christopher Sandford). Judy Huxtable gives probably the best performance as Hildegarde, but the character’s decline into madness is beyond even her talents.

Sapphire and Steel composer Cyril Ornadel produces a memorable musical score (his theme was written so as to be in time with Susan George’s stylish and much-discussed go-go dance routine during the opening credits) including a haunting, possibly ‘cheesy’ song illustrating Marianne’s plight that is repeated at various intervals to arresting effect.

Ultimately, like other Pete Walker ventures, the project might well have been improved if slightly shorter, possibly cut back to 80 or 90 minutes. Marianne’s relentless plight becomes too elongated to care about, the most potent moment being a nicely staged slow poisoning in a sauna that Marianne cunningly defeats by climbing out of the window.