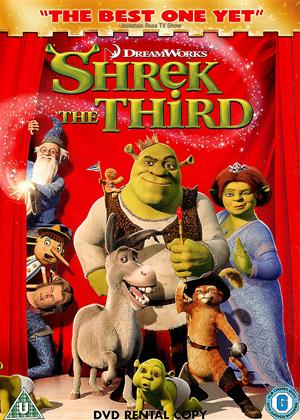 Reviews (2) of Shrek the Third

One Shrek too many - Shrek the Third review by CP Customer

Trilogies of films are rarely a good idea. When a film is successful, it often spawns a sequel. Some exceed the achievements of the first. Some don't. But third films are generally speaking a film too far. Shrek the Third is such a film.

Shrek was an inspired idea. The idea of turning an ogre, the traditional villain of so many fairy stories, into the bad tempered, bald green hero who gets the girl was wonderfully subversive. Shrek Two followed suit, once again making the worthwhile point that you don't have to be good looking to deserve a happily ever after. The film did not simply to replicate the first. The action was taken away from the swamp to the Land of Far, Far away, allowing for more fairy tale puns and the introduction of new characters to capture the affections such as Puss in Boots. In short, it still entertained, it still raised laughs. It was still vital.

In comparison, Shrek the Third is painful. The plot is thin, mainly because the first two films had used up everything worthwhile. To compensate, the writers and producers resort to Schmaltz. The whole story is centred on Shrek's coming to terms with fatherhood, something he finds daunting because he has issues'. However, when he takes Arthur, the true heir of the Kingdom under his wing, he realises how rewarding parenthood can be.

It's probably so nauseating because precious little distracts the viewer from how obvious this is. After showing so much promise in the second film, Puss doesn't get much further than being an amorous but cute sword fighting cat. The three little pigs, the gingerbread man and the wolf all turn up again for no particular reason. The medieval high school is frankly dull. Probably the only vaguely amusing part was the fairytale princesses. But only vaguely. They after all were only being feisty because the pregnant Fiona couldn't be.

All that the film demonstrates is that a strong character needs a strong vehicle to take him anywhere. The wheels have well and truly fallen off this one. Shrek the Third was a sad finale to an otherwise great set of films. At least I hope it is.

Well as is so often the case, except in very rare exceptions, where there's a trilogy there is usually a weak link in the chain and this is the one that does not quite come up to scratch.

Don't get me wrong, the animation is as superb as ever and there are some nice touches, but alas it's juts not as funny, sharp or as witty as the first two.

One nice surprise is Justin Timberlake as the would be hero who puts real humour into the role nd plays the part of a petulant teen rather well.

Murphy as Donkey is actually rather annoying in the thrid movie and Antonio Banderas as Puss in Boots is I feel, sadly under sed and slightly wasted in this outing.

Myers and Diaz work well again as does july Andrews as Shrek's mother in law, and Eric Idle does a very nice turn as a scatter brained magician but it's all a little predictable and now looks as if the story lines have reached an end. They shouldn't do another Shrek now, it's clear whilst still fun, the series should end now and a fourth will only be considered truly a very por relative.