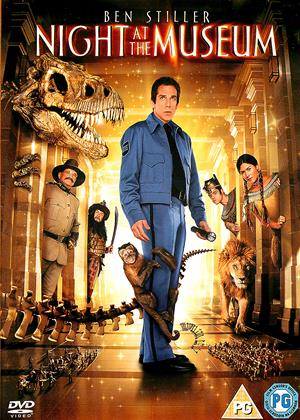 Reviews (7) of Night at the Museum

Strictly for kids - Night at the Museum review by CP Customer

I quite like Ben Stiller but as time goes on the characters he plays seem to be so similar I'm not always sure where one ends and the next one begins! The story was a bit like Jumanji but not as good. It probably made a very good book where imagination could be used, but the film plodded along for me.

Good fun - Night at the Museum review by CP Customer

The film is quite silly but funny.

You enjoy yourself for a couple of hours but you would not remember the film particularly.

Cast is full of stars and good actors.

A mediocre comic exploration of White history and of how White people see the world as filtered through their belief that White people are the civilising force which determines the direction of world history.

Cultures of Colour are depicted as childish, brutal, loveless or savage - especially the second largest empire in history (the Mongolian) - and of being unable to speak English correctly despite the ahistorical nature of the movie in which they appear. Moreover, neanderthal men are played by White performers when their historical counterparts would have been Black; while ancient Egyptians are portrayed as Arabic rather than as Negro.

The theme of a man being a role model for his son is not dramatically explored in dialogue that is so trite that there is no genuine character development or differentiation. There is simply no clear explanation as to why anyone would want to mentor their child that strikes at the fundamental existential and personal identity issues involved. All the other characters are also equally uninvolving.

Despite the lead actor being advised to read a history book, in order to understand the dead White males with whom he finds himself interacting on a regular basis, the movie itself possesses no sense of objective reality regarding historical reality.

This film was an ideal opportunity to be an entertaining history lesson where the implied theme of learning from the past as a preparation for the future is reduced to a mere visual representation of the idea that history comes alive in our imaginations. Instead, the audience is treated to the obsessions of a culture that killed its history by lying about it; making the movie a colossal non sequitur originating from the resulting paucity of the White imagination and its inability to see the past as anything more than a justification for the present.

Fan's of Ben Stiller won't be disappointed by this, his most recent outing. I watched this with my two children and found it a great experience. The story is basic: Stiller takes on a job as a night watchman in the local museum and stumbles across a plot to commit a crime whilst all the artifacts come to life past midnight. The comedy is slapstick, with Stiller's dead pan rhetoric steering the show and the plot holds few surprises. But this film's strength is that it doesn't take itself too seriously and entertained my family for an afternoon. Can't ask for much more, can you?

Ignoring the slushiness of the divorced dad bonds with son disney style plot, this is a great movie. Lots of action for the kids and great humour of the slapstick variety. Mickey Rooney is hilarious

Museum Mayhem - Night at the Museum review by CP Customer

Perfect film to show the kids Just before you take them to the Natural History Museum - It'll keep them looking over thier shoulders for the whole day.

Difficult to imagine a better, more entertaining film for everyone from granny to the toddlers. Absolutely fantastic, totally believable special effects that bring not just dinosaurs but the whole of history to life. Must have been written for the inimitable Adam Sandler. He and Robin Williams both deliver in spades. Predictable but who's complaining?