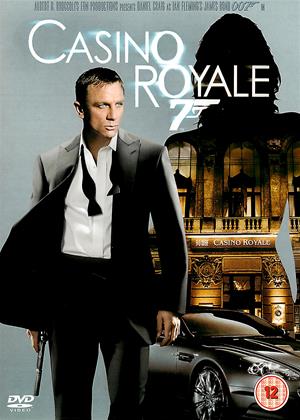 Sign up
James Bond: The World Is Not Enough

Daniel Craig doesn't meet the typical expectation of a Bond character. Instead of a slick, smooth operator, we have a slightly rougher character, with a kind of sadism more true to the novels than that shown in earlier films.

The film includes many standard Bond-film features, but cleverly uses these as a starting point to develop the Bond theme somewhat from previous films.

As to be expected, some first-rate action sequences and wit. Overall, definitely a welcome addition to the franchise.

With the introduction of Daniel Craig as a new Bond, this doesn't just add more to the familiar formula – it creates a whole new mould. When did Connery, Moore, Dalton et al ever get believable plot, actual scars from fighting, or, dare it be said, emotional depth? Craig as Bond spends the film ridiculing the past conventions that we have known and loved, the Martinis, the dapper dressing, the sheer invincibility. Why couldn't every Bond in the franchise have been like this?

OK I admit I was one of those who thought Daniel Craig wouldn't be a convincing Bond. I now have to eat my words as he is utterly superb and without doubt the best Bond, in my opinion. He gives the role credulity as he is totally believable in every way, from the opening sequence where he is not prepared to lose his man, through the love scenes, to the outsmarting of the opposition. Plus, for the ladies, THOSE swimming shorts! A great story with stunning action sequences and some good special effects. There is humour too, and it has less of the 'groan factor'. Judi Dench continues to be brilliant as the doyenne of secret service bosses, 'M'. A must see and, hopefully, the new mould for future Bonds.

how wrong can one be,avid bond fan from day 1 and this guys definatly a sean connery replacement,the first,yes the others where ok?| but now hes back, great film,not a bond in manyway but a bourne?

but still a great film,shame they keept m as judy dench,shes a great actress,but if they are to start again it doesnt fir well,old m and a young 007??but hey thats nitpickin,well worth the wait and expect the next one with excitement ...

My first blu ray and a real demo disk for the format. A return to form for Bond, receiving a new facelift in the shape of Daniel Craig. This film marks a new direction, taking onboard the lessons seen from the excellent Bourne series. A clear picture that really shows why blu ray is miles ahead of the standard DVD format. The only disappointment is the lack of extras, which was corrected in a recent special edition. Something that looks to be repeated in the latest Bond blu ray release. Shameful commercialism from the Bond producers! Just rent instead!

Best of the best - Casino Royale review by JD

In my opinion Craig is the best Bond actor, the chase through the building site is the best of any action adventure and the Bond series is up there with Mission Impossible as the best action series. Few will agree on all counts but you have to agree this is absolutely outstanding if spy action is your genre. The only aspect of this film that could be improved is the baddie who is better in Skyfall.

To start with I thought it was going to be disappointing, much more violence than the early Bond films, but it improved and by the end my wife and I thoroughly enjoyed it.