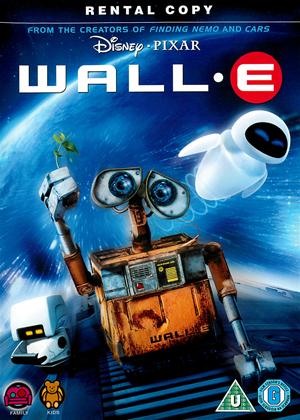 This HAS to be one of the best Diseny/Pixar films made.

It contains many of the expected Disney/Pixar ingredients: Heart warming, funny, moralistic. And in addition, this one is original and sylish. Who'd have thought anyone could become so involved with 2 robots who dont even say anything for the first 1/2 an hour, but you do. The nostalgia of the old Earth before it became polluted, not only offers us some food for thought, but made me realise how lucky we are to have the world as it is.

Its really lovely and my 2 and 1/2 year old Neice loves it too.

Starts off okay, but fails to engage and drags on and on.

Wall-E is one of Pixar's best efforts so far, almost equalling the Toy Story releases. The first half of the film is brave, atmospheric and visually stunning. How this robot comes to life and shows his personality through movement and interaction with the defunct world around him, is magical. The supporting cast of characters ain't half bad either! This blu ray edition is pixel perfect in term of its presentation. Almost the equal of the main film itself is the Presto animated short that was shown beforehand in cinemas - do check it out. And if you want to know more about Pixar, then 'The Pixar Story' is the best place to start. It is well worth tracking down through the menus, as it deserves a more prominent role.

Wall-E works on several levels and multiple planes: as a great animated feature for all ages and background; as a successful exercise in visual storytelling with minimal or no dialogue at all; as homage to most beloved and popular science fiction films from the last 100 years or so; as a warning message to what would happen if humanity continues to pollute the sole Earth it feeds upon; as a cartoon for kids; as everything I ever wanted out of an animated sci-fi feature, and more. It just works.

The film starts off by introducing audiences to Wall-E (Waste Allocation Load Lifter Earth-Class) after which everyone falls in love with this cute, clumsy, but well-spirited robot. His sole goal: to allocate waste to be later properly disposed in a junkyard or a landfill. Unfortunately, Earth has been abandoned long ago, mostly because the last remnants of vegetative life were buried under the heavy pollution with metal, dust, and all kinds of materials unhospitable to human, animal, and vegetative life all at once. Thankfully, Wall-E is a self-sustainable machine, and he uses his A.I. to manually replace his broken parts (robot grooming) and power his batteries through solar tech. An anthropomorphized delight.

One seemingly ordinary day, Wall-E digs out a plant: green, sturdy, and brimming with life to the fullest. Realizing that this might be of some kind of importance, Wall-E carefully nurtures this newfound phenomenon and shields it from external dangers and other unfriendly stuff. And this is where the real adventure begins.

Let’s face it: the animation in Wall-E is amazing. The variety of backgrounds (i.e. static animation) is chosen so well that it becomes a character in and of itself. Plus, these backgrounds always serve the story, and not vice versa; each of these backdrops provides an additional element to be fitted later in the whole puzzle. Each element has its significance in the larger scale of things and I will stop there. Next, the characters themselves.

Wall-E: excellent, splendid, magnificently animated to a point of mimicking all characteristics of a living and breathing child (including the innocence and righteousness that kids carry within them), paired with the stoic demeanor of a programmable automaton, with a juicy topping of a clumsy “older model” of machinery that just cannot grasp the new-founded reality it suddenly finds itself in. Or in a sense: we’re all Wall-E, mindlessly droning Sisyphean tasks, only to be cheered by the sole presence of something natural and different in our bleak lives. Or at least some of us.

E.V.E: Wall-E’s love interest. A newer model with as much human emotions as Wall-E; however, the difference in class (model) and programmed goals (collect trash VS collect vegetation) makes their romance almost impossible at first. Stripped down to its core, Wall-E is a very poignant love story that would make even the toughest nuts cry.

Captain (played by Jeff Garlin): a fat man with a heart of gold (and cholesterol) who (SPOILER ALERT!!!) saves humanity.