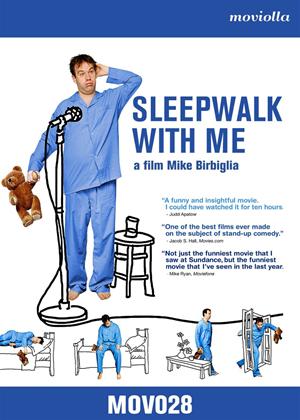 Reviews of Sleepwalk with Me

Sleepwalk with Me review by George Hooper - Cinema Paradiso

Sleepwalk with Me is an unsettling film at times as it takes a look under the surface of how we truly feel about our own relationships and how our own laziness, kindness and all around self absorption keep us following the same path we try to avoid all our lives.

Following Matt (Mike Birbiglia), an amateur stand up comic who is struggling with his long term relationship to Abby (Lauren Ambrose) and the thoughts and views of his family on how he spends his time. When he begins sleepwalking at night his well established routine is disrupted and what he ends up doing might just solve the many problems he has at home, or it might just leave him worse off.

Co written by Birbiglia as well, Sleepwalk with Me isn’t concerned with grand notions of love, loss, betrayal and failure, although the film does depict all of them in some way or another. It’s really all about the little things that make a life, the small things we find comfort in, the things that make us feel safe but also glue us to this version of our existence. Matt enjoys these simple comforts but when they disappear nothing much actually changes.

Matt’s relationship problems prove the films driving force as you struggle to understand Matt’s insistence on having his independence from Abby, a kind, considerate and ultimately loving person that anyone would be lucky to be with. His self destruction, exacerbated by his extra curricular nightime activities isn’t so much about her but the way he doesn’t feel the way he should.

Birbiglia understands the idea of knowing without really comprehending as Matt proclaims to know himself but finds himself hiding behind not only a bartending gig he has on the side but his parents as he blames everyone but himself for his own mistakes.

Working from a script filled with unanswered questions and inane thoughts, Sleepwalk with Me is really a film about the everyman, whomever he may be and as Matt and Birbiglia try to understand more about life we are given a charming yet slightly disappointing picture that never really tells you what you want to hear.