Rent Love and Other Impossible Pursuits (2009) 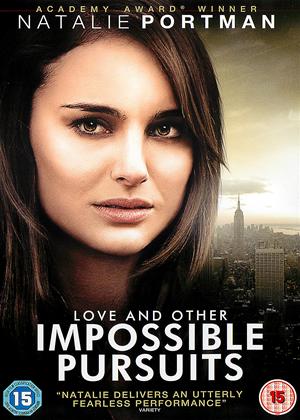 Rent other films like Love and Other Impossible Pursuits

Reviews of Love and Other Impossible Pursuits

A film about a homewrecker is never new but it’s no reason not to keep on making pictures about it. Especially if the homewrecker is Natalie Portman. Based on the novel ‘Love and Other Impossible Pursuits’ by Ayelet Waldman, its film adaptation presents domestic drama at its clichéd best. It’s with Natalie Portman that it becomes refreshing somewhat.

Natalie Portman plays Emelia, a Harvard-trained lawyer who seduces her new firm’s boss (Scott Cohen) and eventually ruins his marriage with his wife (Lisa Kudrow). We are given flashbacks of their courtship, a total contrast to the misery they experience in the present. See, Emelia is now married to her former boss and have become his second wife. They have also lost their newborn baby and as Emelia grows sadder at her circumstance that she has created, she finds ways to cope the best way she can. Her burgeoning relationship with her stepson looks promising but she will always have to contend with his real mother, because Emelia will always be the homewrecker.

Directed by Don Roos, ‘Love and Other Impossible Pursuits’ is an upper-crust romantic drama that has no intention to steer away from the obvious. The scorn that Natalie Portman’s character experiences have been a drama-by-numbers showcase. Maybe the film really wants to tell viewers that homewrecking pays like a bit**, big time? If so, it becomes a cautionary tale and if not for Portman, the other woman wouldn’t be sympathetic at all. The likeable quality that she has and the way she plays off on her vulnerability – at times as if the victim of her own doing – puts the film in a new light.

Besides Portman’s performance, it does show how rich people deal with ordinary people problems. And guess what, they do it similarly just like us. They’re vindictive too. They have petty fights. And they all dislike the homewrecker. Surprise, surprise. The film doesn’t show anything new. If you’re all right with déjà vu, this one’s for you.