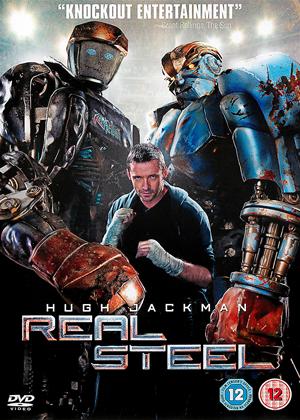 Much better than I expected. Give it a try - you might enjoy it :) - Real Steel review by RP

Set in the near future, this is a boys' film about robots boxing each other - a bit of a bizarre proposition, but I quite enjoyed it. It's a certificate 12 which will give you an idea about the age range it's aimed at.

The two stars are Hugh Jackman, who makes a poor fist at being a parent but manages a bit of antihero quite well, and young Dakota Goyo who I found to be seriously annoying ('too cocky by half' comes to mind) and who also has a girl's name (or perhaps I'm thinking of Dakota Fanning here...)

'Real Steel' is vastly better than any of the 'Transformers' films and succeeds quite well at giving Atom the robot a bit of personality and the blend of CGI and puppetry to get the 'robots' to perform is excellent. And there's more than a touch of the 'Rocky' movies here as well.

The director is Shawn Levy who directed 'Night at the Museum' and Steve Spielberg is listed as an executive producer, which I think means he put up some of the money. All of Mr Spielberg's films, whether as director or producer, tread a fine line between entertainment and outright schmaltz, and this one is no different - but it comes down firmly on the 'entertainment' side of the line.

Sit back and let it surround you in rather silly mayhem. You might enjoy it - I did. I'll give it a generous 4/5 stars - it turned out to be much better than I expected.

Imagine a world where boxing is still king. Humans, however, are not. Now throw in a down-on-his-luck father and an estranged smart-alecky son, and you get a sci-fi-family-drama movie titled ‘Real Steel’. Starring Hugh Jackman in the lead as a former prizefighter and now an underground robot fight promoter, his son Max played by newcomer Dakota Goyo, and directed by Shawn Levy. Movie may have more robots without hearts but it’s geared to make human hearts warmed. It succeeds but only slightly.

‘Real Steel’ has been dubbed the late 80’s ‘Over the Top’ with Sylvester Stallone. Instead of an arm-wrestling tournament for bonding between father and son, this movie has robot boxing, a sport that has now become overrun by dirty robot fighters and even dirtier promoters. What has the world come to, right? But no worries, Hugh Jackman is in the picture.

Even if he is X-Men’s Wolverine, he’s a real puppy dog of an actor. A flash of that killer smile and maybe a glimpse of those guns, then no harm will be done. Jackman is one of those rare actors that can come across as menacing but a sweetheart both at the same time. It is with Jackman that ‘Real Steel’ becomes believable instead of ridiculous. Also, Jackman elevates this concept to serious levels; this could have been the futures of ‘Short Circuit’ and ‘Wall-E’ in cinema. Incredible, true, but this is a movie after all.

Many movies have made enemies of robots; but ‘Real Steel’ gives them humanity, and intentionally or not, it’s a device to reel people’s emotions in. To say it attempts to be a Steven Spielberg movie is all right. We need to laud them for at least even trying.

The motion capture effects of the robots and the boxing skills are hard to beat. There, the action is wondrous. Sure, the characters are cartoonish especially the villains, but movie is about choosing sides and hopefully, you’re betting on the right one.