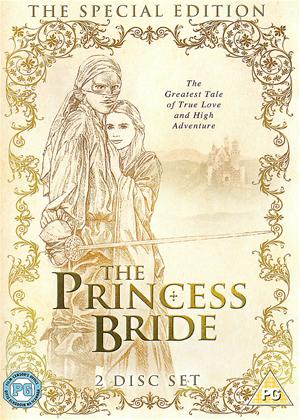 Reviews (4) of The Princess Bride

A classic - The Princess Bride review by CP Customer

it really is, thanks to finding new life on DVD. This film is for all ages, featuring a classical tale but with plenty of humour and a long lasting feeling of satisfaction.

Memorable characters, classic lines, its all here and well worth checking out this film. You won't be disappointed!

Surprising how this film jogs old memories of grimes tails. some nice cameos and a wonderful man made world of lakes and trees and lots of harmless sword action. Funny

Old-fashioned non-pc swords and fantasy fun, and allthe better for it. - The Princess Bride review by PV

This is based on the book by William Goldman (known for his quote about the film industry that NOBODY KNOWS ANYTHING).

This is an 1987 so is mercifully free of political correctness, parachuted in black characters, and kick-boxing female ones - back in those days they allowed a damsel in distress to be rescued by male characters AS TRADITIONAL STORIES DICTATE. Since Hollywood started worshipping #metoo casting, cinema seat sales are down 26%.

My favourite character here is Fezzik the giant who despite some awfully pronounced dialogue (couldn't someone tell him how to pronounce 'prince') certainly makes an impression. He was a wrestler known as Andre the Giant, born in France to Russian and Polish parents; he died in 1993.

I enjoyed this for the deeply derivative hokem fantasy nonsense it is - a shame this sort of film is seen as un-pc now; a modern version would have aggressive female characters doing down men and ethnic characters parachuted in everywhere AND I WOULD NOT WATCH IT.

Ok, I certainly thought this was a weird film. Every time I thought I knew where it was going, it went somewhere else!

By the end of the film I felt weirdly positive and optimistic, not like me at all!