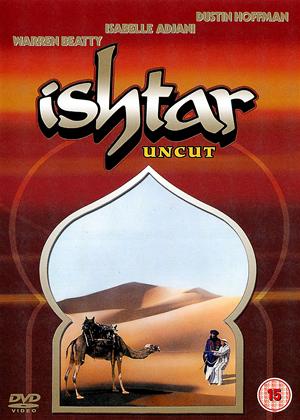 This movie is legendary for all the wrong reasons. Once considered the ultimate box office bomb, the insane amount Hollywood spends nowadays on what back in the day would have been cheap and cheerful B-movies means that, even adjusted for inflation, its huge losses are equalled or dwarfed by several films every year. But it's still a stupendous failure, for such ridiculous reasons that a making-of documentary would probably be much more entertaining than the film itself. The main thing you need to know is that the relatively obscure and inexperienced Elaine May got the job of directing a colossal blockbuster mostly shot on location in Africa because both its stars owed her favours and they thought this movie would do wonders for her career. It didn't. She was so out of her depth that she had a nervous breakdown on set and only managed to finish the film at all because the huge battle that was meant to be its thrilling action-packed explosive climax was almost entirely left out. Her next directing job was a TV episode in 2016.

The plot concerns two incurably optimistic but not very bright singer-songwriters who think they're the new Simon and Garfunkel because they're oblivious to their own complete lack of talent. Which all by itself should be enough plot for a movie, and apparently in the first draft of the script it was. And it's not intrinsically a bad idea for them to get a booking in some third-world backwater because they're the only artists desperate and stupid enough to accept the gig, and for them to be smuggling a priceless McGuffin lots of shady characters want but they themselves don't know they've got. The trouble is that this plot-point ends up dominating the movie so completely that their Z-list showbiz career becomes irrelevant and is barely mentioned for most of the film, even though seeing a lot more of that would undoubtedly be funnier than watching two idiots lost in a desert trying not to die.

Everything else is just as bizarrely misjudged. For example, there's a running gag about them being tricked, for no discernible reason, into buying a blind camel which they keep with them for the rest of the film. Because CGI wasn't around in 1987 it had to be a real live camel, and making it bump into things risked injuring the poor beast, therefore the only bit of funny business that specifically requires a blind camel is used minimally and soon dropped altogether. So the joke is that they have a camel which every so often they remind us is blind. How could anyone have ever thought that would have audiences rolling in the aisles? You can't even see where the huge budget went. The desert sequences could easily have been filmed in the USA, the Moroccan market-place is small enough that it would have been far cheaper to build it in California than go to Morocco, and the massive battle involving vast numbers of extras swarming dramatically across the Sahara was never filmed at all owing to director meltdown.

At times you can see a perfectly good comedy about two men trying to do something they passionately believe in but are very bad at struggling to get out, but what it most resembles is one of those terrible non-horror movies Hammer used to make in which the cast of a popular sitcom got a big-screen outing where they abandoned the TV show's setting and went on a disastrous holiday. Perhaps if the writers of this megaflop had ever seen "Holiday On The Buses" they would have had the sense to confine the action to New York, but sadly for all concerned they obviously hadn't. Quentin Tarentino believes this film to be an unjustly neglected masterpiece. In this, as in so much else, he is wrong.