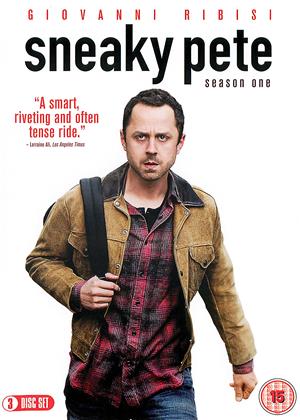 First couple episodes it felt quite all over the place but glad I stuck with it.

It's no masterpiece but it's a fairly decent first series. The acting is decent and the characters are all interesting.

The dounle end twist is good and leaves a set up perfcetly for season 2.

So, this is co-created by Bryan Cranston and anything with him in is worth watching. It's what he did after the sublime Breaking Bad (the pilot for series 1 is the best ever in US drama arguably though later series jumped the shark somewhat). No way can this reach the masterpiece standard of Breaking Bad, of course.

Both series rely on the same central dramatic tension of 'will the deception be discovered' - as did excellent spy drama (2013-2018) The Americans - and 2 actresses here also feature in that (though the accent of one is the weirdest I have ever heard in any US TV drama series - I think an acting class taught her how to to an English or Scottish accent, but the Klingon version she speaks has no known planet!)

The imposter plot is an old one and there have been many true-life examples - and attempts - in history. A 16th French case was made into the 1982 film The Return of Martin Guerre. The Talented Mr Ripley is another, based on a Patricia Highsmith novel. The Tichbourne Claimant (1998 British film based on a true 1854 case) and the deeply weird documentary The Imposter (2012). Not to mention many Elizabethan plays and ancient myth.

Plenty of conman - and conwoman - films too, of course. The Sting, Paper Moon, American Hustle, Catch Me if you Can, Mississippi Grind. All good - and the card playing plot here certainly adds interest, for the cleverness of the cons and tricks etc. I like magic and card tricks etc so that aspect always appeals to me.

What I disliked was the convoluted plot which involved just too many characters. I suspect some were added just tick inclusion/diversity boxes too. But when, say, female characters look very similar it can get confusing! Some added little or nothing to the film or story in any way, just appeared in a couple of scenes to add colour. Needs a character cull. A good script edit to fight the flab! I think 10 episodes could become 8 too.

The plot is pretty incredible all round BUT then many are, so if you suspend your disbelief it's OK. Though the fact many characters have to explain stuff or that dialogue is deliberately set up to do so rings a few alarm bells. Very clunky at times.

And I hated the constant soundtrack in the background playing like some video game. I suspect this is an attempt by the producers/direct to mimic movies like American Hustle, the Kingsman films and the Now You See Me movies (which I find annoying). No doubt all to appeal to a younger audience with a small attention span - though I doubt many of them would stay with a 10 part series like this with a complex plot.

BUT I enjoyed it and will watch the next series. 4 stars. Just.

A Busy One - Sneaky Pete: Series 1 review by BE

Lots going on in this presentation. I watched the first episode and enjoyed it. I didn't realise Sneaky Pete was a ten part television series. I cannot commit to watching another nine episodes. My bad.