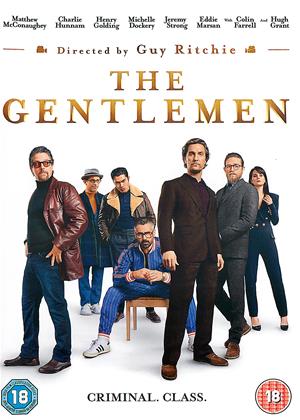 Reviews (16) of The Gentlemen

Guy Richie is back with the marvellous film about the trial and tribulations that beset Mickey Pearson (wonderfully played by Mathew McConaughey) who is looking to off load his drug empire whilst that the same time Hugh Grant playing a gay reporter trying to sell his story for a large payout and the dead pan performance from Charlie Hunnam as Mr Pearson's right hand man keep the film moving along.  There is humour, pathos, action and comedy expertly handled by Guy Richie, a perfect vehicle to ease the COVID19 lock down!!

Not Real Rock n Rolla as hoped. - The Gentlemen review by NC

Is pretty good. Is Ritchie. Is London gangsters etc. Could really have been better....and saved millions.....by not having Grant and McCon in it. Remember back, not then well known guys, all brilliant.....Daniel Craig, Mark Strong, Jason Statham etc etc. Natural character fit. Film full of cameo folk given a break. No need for the megga money boys. Surely Guy can raise backers without resorting to big names?

The two stars get way too much of the film which takes some of the ambience away.

This film is a classis in my eyes. If you loved Lock Stock & Two Smoking Barrels & Snatch, then you will love this. One of my top films of 2020 so far - & I've seen several this year (due to lockdown).

Very funny and all the bits of a Guy Ritchie movie as you’d expect and hope for.

I wasn’t expecting much, but thoroughly enjoyed this film.

Not as good as the reviews in my opinion - more of a greatest hits compilation! - The Gentlemen review by CS

Not what I was expecting at all, I was expecting some slick stylish gangster movie along the lines of Oceans 11, a heist story or something. Instead this is a slow paced, over complicated, mish mash of a story, which keeps flicking backwards, forwards, sideways and upside down in so many different directions, that far from being clever and sophisticated, it becomes overburdened and just drowns in it's own cleverness! Yes it is an interesting film to watch and all the different parts do start to come together, in a sort of way towards the end. In parts predictable, unoriginal with lots of bits nicked from other films, this is more of a menagerie of characters, cut and pasted into what really amounts to a greatest hits compilation of all Ritchie's other movies, with bits of other peoples movies pasted in as well for good measure. This is like a homage to British gangster cinema and reminded me a lot of the style of films Michael Cane appeared in, from the 60's and 70's. Well filmed and with some good direction, it just feels cluttered with too many characters and side stories and the plot moves around too much, perhaps a trimmed down version concentrating on the main characters and storyline would have worked better. I'm not too sure the themes of teenagers happily engaging in crime is a very positive role model either, as rather than deterring young people, this film appears to positively promote and encourage young people to engage in crime by making it appear fun! I found it hard to concentrate watching this and kept nodding off in parts and may partner just fell asleep!

I find Guy Ritchie a bit hit or miss. I loved Snatch, Lock stock and sherlock Holmes film but wasnt fussed about Aladdin and rock'n'rolla.

However this film is entertaining from start to end. There aren't many extreme gory scenes other than head shots.

The cast are great and the constant twists and turns make this film a hoot.

Matthew McConaughey, Charlie Hunnam, Hugh Grant and Colin Farrell are all great in their roles. Again this could easily start a tv miniseries.

Would watch this again.

Not to my taste. Despite the presence of Patrick McConaughey who I greatly admire, this movie is pretty dire. Story tries to be clever but relies on obvious plot twists and stereotypical characters.

To be fair, calling this dreary parade of hackneyed mockney geezer and posh chap cameos a pound shop Tarantino exaggerates its value by one pound. Not even bad enough to be unintentionally funny, just dull. It may have a good ending, but you will need a heroic tolerance of boredom to find out. Mine failed after an hour.

Great to see Hugh Grant playing a slightly sleazy character for a change. Loved the Essex accent. Colin Farrell provided lighter moments with his unlikely crew known as the Toddlers. McConaughey was excellent but the star is Hunnam, an actor I am unfamiliar with.  Great scene where he has to deal with some dead beat punks. Violence is inferred rather than a la Tarantino and thus acceptable to the squeamish. Very entertaining. Recommended and a lot better than much currently available.

This is director Guy Ritchie's return to the geezer/cockney gangster film that made his name. It's a welcome return after the disastrous King Arthur: Legend of The Sword (2017) and the disappointing The Man From U.N.C.L.E (2015) although it lacks the originality and freshness of Lock Stock And Two Smoking Barrels (1998). Matthew McConaughey is very good as Mickey Pearson, a self made big time marijuana drug dealer who uses large aristocratic estates to grow massive amounts of weed for distribution (a neat dig at the English upper classes and British tax systems from Ritchie, himself a man of aristocratic stock). He wants to sell the business to Matthew (Jeremy Strong) and faces various attempts by other gangsters to buy into his lucrative enterprise. The story is told through a narration by a seedy investigative journalist Fletcher played by Hugh Grant, who is fantastic here, and who is attempting to blackmail Mickey. The story unfolds in Ritchie's typical episodic style with a host of funny and unusual characters including Charlie Hunnam as Raymond, Mickey's right hand man, Colin Farrell as a boxing coach who gets involved, Henry Golding as a Chinese gangster who covets the power Mickey wields and Michelle Dockery as the gangster's cockney moll, and very good she is too. There's plenty to like in this film, it's funny, very adult, not too violent surprisingly and well scripted if at times a little clumsy to the extent you can see what's coming. Overall it's entertaining and definitely worth seeing but vaguely disappointing.

Was expecting less, but got more - The Gentlemen review by RD

I've watched a lot of films recently and most of them have been mediocre.

When I started to watch this I wasn't aware it was Guy Ritchie till I came back to look on Cinema Paradiso, at which point I expected less. Could it compare to Snatch and Lock Stock?

Turned out it could. I thoroughly enjoyed it, and it is definitely one of the better films I've seen recently

The Gentlemen is a real return to form for Guy Ritchie. Just when you think he has settled into whipping up not-so-stellar action pictures undeserving of his slick direction, out comes a more grounded and giddy gangster picture to place the director back in his element. Though somewhat troubling in that the film never really manages to escape the expected Ritchie-isms, it’s at least a pleasing experience if not a masterpiece from such a talented artist.

In the tradition of Snatch, the film is an intersecting story crime drama where everything seems to snowball out of control. Mickey Pearson (Matthew McConaughey) is getting a little old for his elaborate weed growing operation spread across Europe. He’s kinda-sorta trying to sell it to the wealthy investor of Matthew Berger (Jeremy Strong), hoping to get a pretty penny as he exits the business. What he didn’t count on was the cocky Chinese mafia son Dry Eye (Henry Golding) attempting to hone in on his business. And he especially didn’t plan on a gang of hoodlums managed by the oddball Coach (Colin Farrell).

That’s wild enough but the story gets even more eccentric with its initial framing device of Pearson’s right-hand man Raymond (Charlie Hunnam) being relayed the events by the gay reporter Fletcher (Hugh Grant). These scenes are exceptionally fun not just because of the energy between them but how Fletcher’s story seems to fluctuate between what he’s blackmailing Raymond for and what he’s pitching as a screenplay. It’s also a lot of fun to watch the sexual tension increase with every scene of them, to the point where Fletcher is literally begging to hop in the sack with the bearded Hunnam.

Before I go into the expected slickness of the picture that we’ve come to expect from Ritchie, I’ve gotta admit I really dug how the director has thrown the audience a meaty steak of queer theory on this film. Aside from the cherry on top being the flirtatious and sexually hungry Fletcher, there are lots of queer moments throughout that will easily sneak by most of the mainstream. This ranges from dialogue about bench pressing and sexual acts among all the male characters to women being seen more as distant objects they never have sex with. Take Pearson’s wife Rosalind (Michelle Dockery) for example. She teases Mickey with sex but never gives it to him and at one point is nearly raped right before Mickey swoops in to blow the brains out of the rapist.

While the queer theory element is the most delicious part, there’s still a lot to love about this picture on its surface. The all-star cast is in top form, really having fun with their roles. I think this is the first time I’ve ever seen Charlie Hunnam is a role that seems most relaxed for a guy who chases down punks and threatens them with a gun. The editing is naturally fast-paced and is cut in a manner that has enough faith in the audience that it can cut between several scenes without worrying the audience can’t keep up. The dialogue is exceptionally crisp with lots of to-the-point talk of intimidation and several twists within tense showdowns.

I only wish that The Gentlemen had just a little more to offer. It’s not that Ritchie has lost his fun style but it doesn’t really feel like it’s improved since his previous gangster pictures. This is only a mildly troubling aspect because after a slew of lackluster movies, its pleasing to see Ritchie back in his element where he excels at best. He doesn’t deliver quite the masterpiece he’s capable of but still gives us a friendly reminder about why we dig him so much.