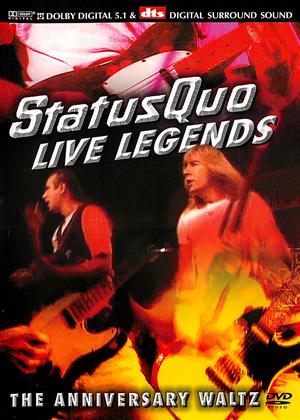 Synopsis:
This performance was originally filmed to celebrate the 25th Anniversary of the band, and is now released with surround sound and bonus tracks. The group had actually been formed in 1965 when they first appeared together playing to holiday makers at Butlin's holiday camp in Minehead.

For this unique occasion, a special train was hired to ferry the band and assorted admirers down from London to witness a spectacular anniversary concert featuring all of the highlights from a long and glittering career.

Tracklisting:
- Caroline
- Roll Over
- Lay Down
- Little Lady
- Medley 1 (Mystery Song, Railroad, Most Of The time, Wild Side of Life, Rollin' Home, Again and Again, Slow Train).
- Hold Yer Back
- Down Down
- Medley 2 (Dirty Water, Whatever You Want, In The Army Now, Rockin' All Over The world, Don't Waster My Time).
- Medley 3 (Roadhouse Blues, Irish Hat Dance, Mexican Hat Dance, the Wanderer, Marguerita Time, Living On An Island, Break The Rules, Something About You Baby I Like, The Price Of Love, Roadhouse Blues, The Happy Wanderer).
- Burning Bridges
- Medley 4 (Let's Dance, red River Rock, No Particular Place To Go, The Wanderer, I Hear You Knocking, Lucille, Great Balls Of Fire).
Actors:
Status Quo
Studio:
Classic Rock
Genres:
British Films, Music & Musicals
Countries:
UK

Sign up
Status Quo: Famous in the Last Century

Sign up
Pink Floyd: Live at Pompeii: The Director's Cut

Unavailable
Genesis: When in Rome 2007

Sign up
Now That's What I Call a Music Quiz: The 80s

Sign up
Phil Collins: Live and Loose in Paris

Sign up
Poirot: The Cornish Mystery / The Disappearance of Mr Davenheim

Sign up
Who Wants to Be a Millionaire: Magic Moments and More