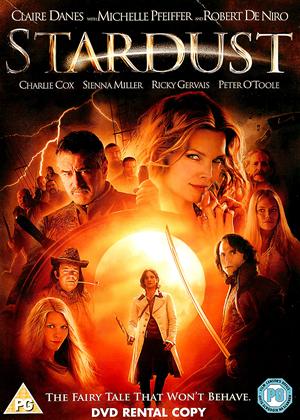 A visual treat for the whole family. Stellar cast with Michelle Pfeiffer switching from bewitching to terrifying before your eyes. De Niro appears to enjoy himself and the cgi does not detract from the acting too much. The film will probably become a christmas regular on television. Good defeats evil again, at least in this fairy tale.

The screenplay is written in a modern style and the story appeals to the whole family. A great film to sit down and watch together. Could be very scary for the young ones though, but good triumphs in the end, so it's that good kind of scary that you don't mind! Clare Danes and Charlie Cox are appealing as the two young leads and the story is full of imagination and escapist fantasy. De Niro camps it up as an outwardly butch captain with some less masculine proclivities!

Stardust, based on a novel by Neil Gaiman, came out in theatres with little more than a peep. I saw no previews for it, only a couple of brief commercials. The critical reaction was underwhelming so my expectations weren't too high. It's not a massively budgetted movie like Lord of the Rings. The plot line is your very basic fantasy quest (the hero sets out to look for a fallen star) with many obstacles to overcome in his way. But within that basic outline, the story is lively and imaginative. It's simply aiming to be a lot of fun for all the family and a charming little romance to boot. And it succeeds wonderfully. There's a lot going on, but the story is told well and is almost entirely coherent. It isn't a masterpiece, but it definitely can occupy the same kind of ground that something like The Princess Bride has, although I don't personally like it quite as much as the earlier film. This movie definitely gives the viewer a fun, rollercoaster ride right to the end and is suitable for all the family!

This is a great film for the whole family - one that boys and girls can both enjoy (as well as adults). A cracking plot, great characters and wonderful cast.

I loved this movie - to my surprise, because I don't usually like fantasy. But what really makes this a winner is the script - based on a graphic novel. It is so typically British in its humour - with winning one liners, and witty dialogue, throughout. I liked this way more than any of the Lords of the Rings movies or the average Hollywood fantasy movie - so pompous, humourless and portentous. Unlike most British films, this has wide and commercial appeal - and the pace never slips either: multiple plot strands and twists make the action move along nicely, and the key characters face growing obstacles to their tru aim. There is so much tongue-in-cheek irony here that I can't help feeling that the original author meant it as a parody of the whole genre - with the happy ever after conclusion perfectly judged. This is a movie I'd be p[erfectlt happy to watch again if it comes on TV at Christmas - my only criticism would be that some lines can't be heard over the background music (especially on a standard TV) so I had to rewind and listen again 3 or 4 times. But nonetheless, this is fine entertainment of the type that the British film industry rarely manages. I REALLY loved the witty script and some really quite risque jokes too. 5 stars!

Great fun and a surprise as I had not heard much about it. Steller cast. Witty, light, engaging and suspenseful. Pfeiffer is gorgeous, even if she is an old hag most of the time. Great stuff! Kids will love it and so will adults; hits the fantasy spot!!

This is normally the type of film I avoid like the plague, but I was nagged into renting it by a young family member who I sat and watched it with. I can honestly say this was one of the most entertaining and well made films I have seen of this type. If you're looking for a good family film which will keep every age group entertained, then look no further. A great storyline, brilliantly acted by a great cast and absolutely magical from start to end.

This is one of those movies that is actually FRESH (and I say that having seen it four times) and different. It could have been twee or schmalzy, but thanks largely to the casting of a spiky Claire Danes as Yvaine and the genuine likeability of Charlie Cox as Tristan, it isn't. It could also have been yet another fantasy flick which tries to posit an alternative logic for its alternative world, but it doesn't. We just get sucked into that world, lock, stock and barrel.

Much has been made of Michelle Pfeiffer playing against type as an evil hag.. And of Robert de Niro's camp turn, though I found that a bit wearying after a while. But my absolute favourites were the seven grasping, internecine princes. The scene in which a drowned Septimus is voodoo'd into fighting Tristan was both astoundingly clever and decidedly creepy.

All in all, you really do care that there should be a happy ending...