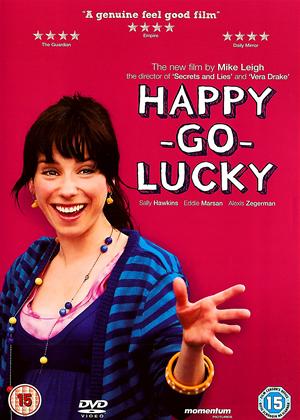 Synopsis:
Poppy (Sally Hawkins) is an irrepressibly cheerful primary school teacher who won't let anyone or anything get her down. Even when her bicycle, which she so happily rides through the busy streets of London is stolen, her first thought is only: "I didn't even get a chance to say goodbye." Living with her flat mate Zoe (Alexis Zergerman), Poppy has a gift for making the most of life. Determined to learn to drive, she finds herself matched with Scott (Eddie Marsan), an uptight driving instructor who is everything she is not.
Actors:
Sally Hawkins, Alexis Zegerman, Samuel Roukin, Elliot Cowan, Andrea Riseborough, Sinéad Matthews, Kate O'Flynn, Sarah Niles, Eddie Marsan, Joseph Kloska, Sylvestra Le Touzel, Anna Reynolds, Nonso Anozie, Trevor Cooper, Karina Fernandez, Philip Arditti, Viss Elliot Safavi, Rebekah Staton, Jack MacGeachin, Charlie Duffield
Directors:
Mike Leigh
Writers:
Mike Leigh
Studio:
Momentum
Genres:
British Films, Drama, Romance
Countries:
UK
Awards:

Mike Leigh is almost always associated with gritty (and, frankly, not very uplifting) dramas and uses highly unusual production methods; principally avoiding having anything resembling an actual script and just allowing the story to more or less develop as the cast live out their roles in front of the cameras.

Happy Go Lucky could be seen as Leigh's lighter side, offering humour aplenty as the central character, Poppy (Sally Hawkins), stumbles through life in a permanent state of supposed optimism and perkiness. Poppy lives in Camden in a candid and exceptionally close relationship with her long-time best mate, Zoe (Alexis Zegerman), and we are treated to what amounts to a series of vignettes from her life. Poppy is both endearing and exasperating; as an audience we find ourselves both loving her and thinking "I'm so glad she's not actually my friend" or perhaps more correctly "I'm glad she's not my responsibility". Inevitably we gain an awareness of the innate lack of depth to Poppy's stream-of-consciousness chatter, and are drawn to the profoundly insecure, frightened, childlike nature beneath the "bubbly" surface; this has been used as a negative critique by some, as if Poppy were intended to be a lesson to us all in how to be happy - this is nonsense. I found it to be an object lesson in character study. This is beautifully brought to the fore as the fraught relationship that Poppy has with her clearly unhinged driving instructor, Scott (Eddie Marsan) disintegrates to the extent that he physically assaults her. There's no doubt that Scott is disturbed and has disturbing views, but he is also the only person in the film to clearly show that endless babble and meaningless chatter do not constitute "happiness". We are. alas, never given the answer to what does actually constitute happiness, but that's probably beyond even Mike Leigh's outstanding talents. The film doesn't tell a story in the narrative sense, it simply immerses the viewer in someone else's life and surroundings, leaving you to take whatever "message" you might want from it. This seeming lack of direction is its true strength.

The performances are, without exception, fully rounded and as utterly convincing as I've ever seen. Mike Leigh's modus operandi certainly brings out the best in an actor sufficiently confident and talented to explore their character to the full. Highly recommended.

The most irritating character of all time? - Happy-Go-Lucky review by CP Customer

I have to admit to not being much of a Mike Leigh fan, though every now and then he releases a film which creates some critical acclaim and media hype and like a sucker I fall for it every time. I usually love small character based films but 'Happy-Go-Lucky' for me was mind numbingly boring, cliché ridden and with a lead character who was like something out of a bad Catherine Tate sketch. Sally Hawkins creates the possibly the most irritating on-screen character of all time, an unrealistic and annoyingly cheerful 30 something primary school teacher with an I.Q no higher than the 6 year old's she teaches. The dialogue was equally moronic with characters who speak to each other in four letter sentences, the films only saving grace was Eddie Marsan as Scott, apart from that the film was up to Mike Leigh's usual overrated and clichéd rubbish.

Really slow, wouldn't call it a good chick flick at all - it was so boring and the girl was really irritating!

Coming from Mike Leigh, Happy Go Lucky features a mainly female cast, but it would be short-sighted to think of this as a chick flick. The theatrical trailer perhaps wrongly guided some to this opinion. Leigh’s work captures the essence of what it is to live in Britain, and with this film it’s through the eyes of Poppy, a single 30ish teacher who has a positive outlook on life.

She continually tries to make everyone happy even when clearly they prefer a life of misery. The film isn’t about love, shopping or finding Mr Right and that’s refreshing. Instead you witness the ultimate driving instructor, a hugely memorable character that will remain in your memory permanently. Happy Go Lucky isn’t for everyone, Poppy can be sickly sweet at times and life for her seems all too easy. The interaction with the instructor more than makes up for any shortcomings and delivers more laughs than I’ve seen in many Hollywood ‘comedies’ of late.

We couldnt even watch this...after 15 minutes we were too bored to continue. It wasnt a good choice for us!

I'm a great admirer of Mike Leigh's method of working but this film is dreadful.

Unusually, he's packed the cast almost exclusively with female actors & trusted them to grab the chance but they all let him, & themselves, down. With the exception of the lone male driving instructor (who probably got the part because Timothy Spall wasn't available) I didn't see any of the familiar actors who normally do Leigh proud. If he'd put the story line into the next age group we could have enjoyed the work of Alison Steadman, Brenda Blethyn & lovely Lesley Manville. For me, no Mike Leigh film is complete if it doesn't include Ruth Sheen.

Mike Leigh had seemed to have lost his alchemic ability to distil contemporary life in the mid noughties, and how timely he should return to form in 2008. The year the banker's crash triggered austerity. The period when social media began to amplify the splintering of England. It is from the frontiers of this divided nation that Leigh and his cast are reporting. The brilliant Sally Hawkins lives the personality of the title; but she is tough and combative as she needs to be given that experience will burn away your optimism like a match. The core of the film is the exposure of her dayglo, might-never-happen but sincere and conscientious primary school teacher to a trigger-unhappy, randomly prejudiced conspiracy-theorist driving instructor created by Leigh regular Eddie Marsen. Happy-Go-Lucky emotionally channels the anger, the passive aggressive anxiety which is the hum in the wires of the circuits of contemporary British life. Typically the film has divided its audience hugely! Here we are, twelve years on and it seems all the more prescient that Leigh made this when he did.